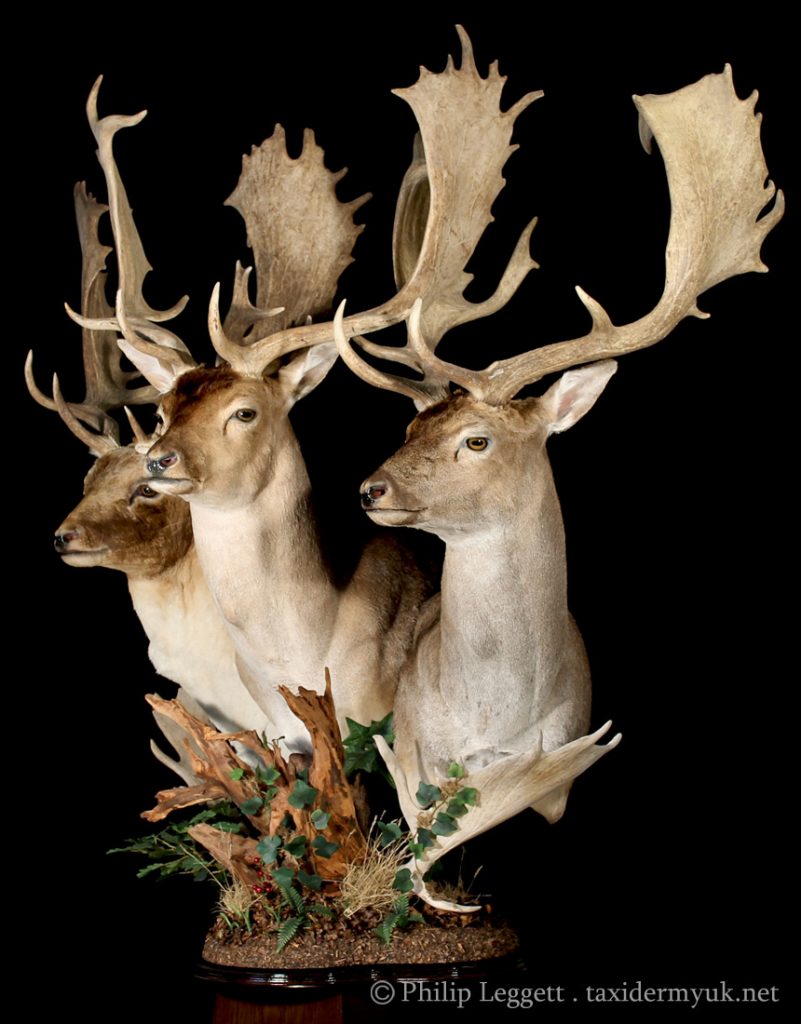 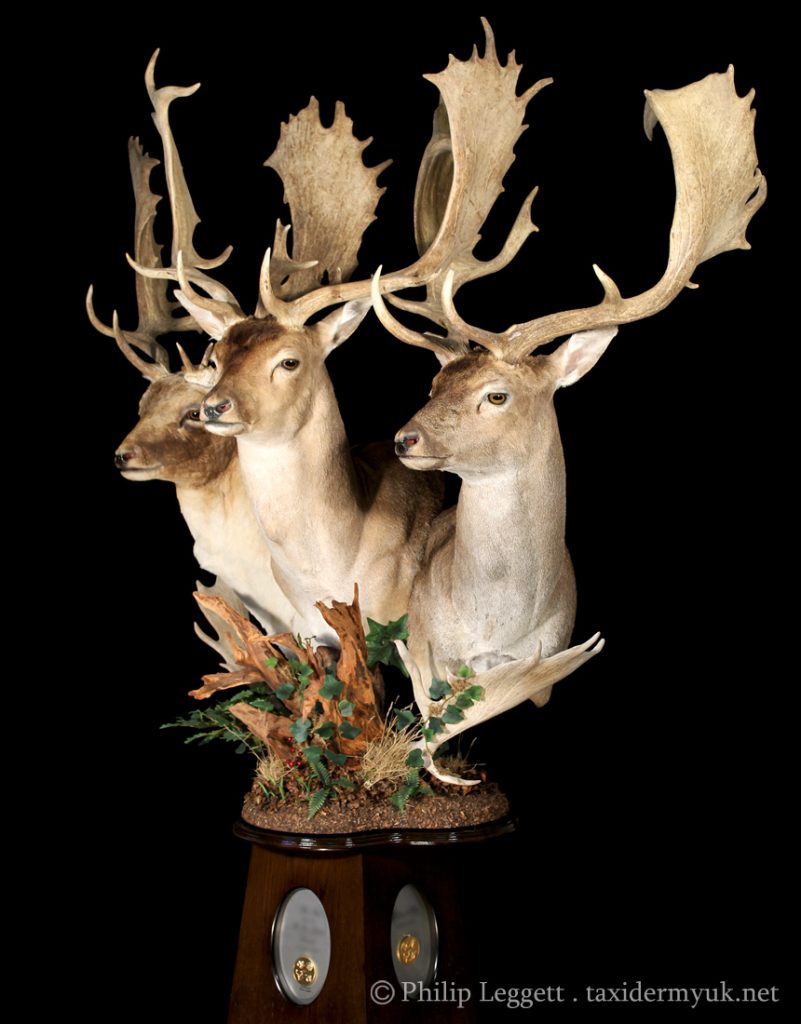 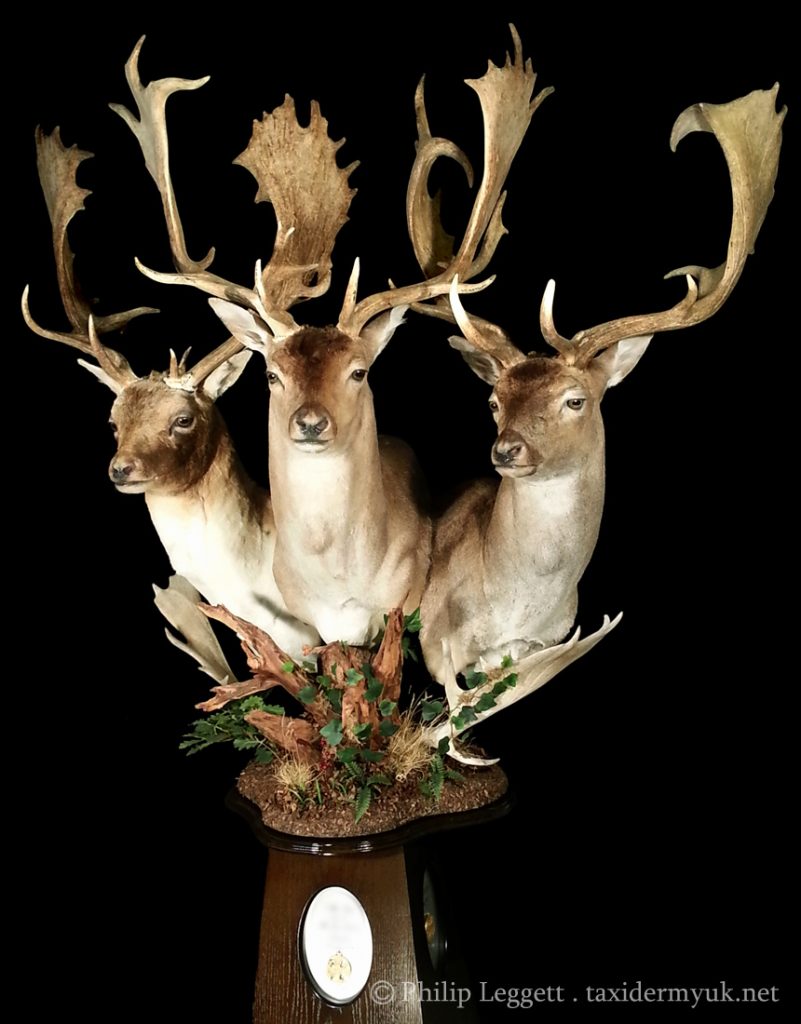 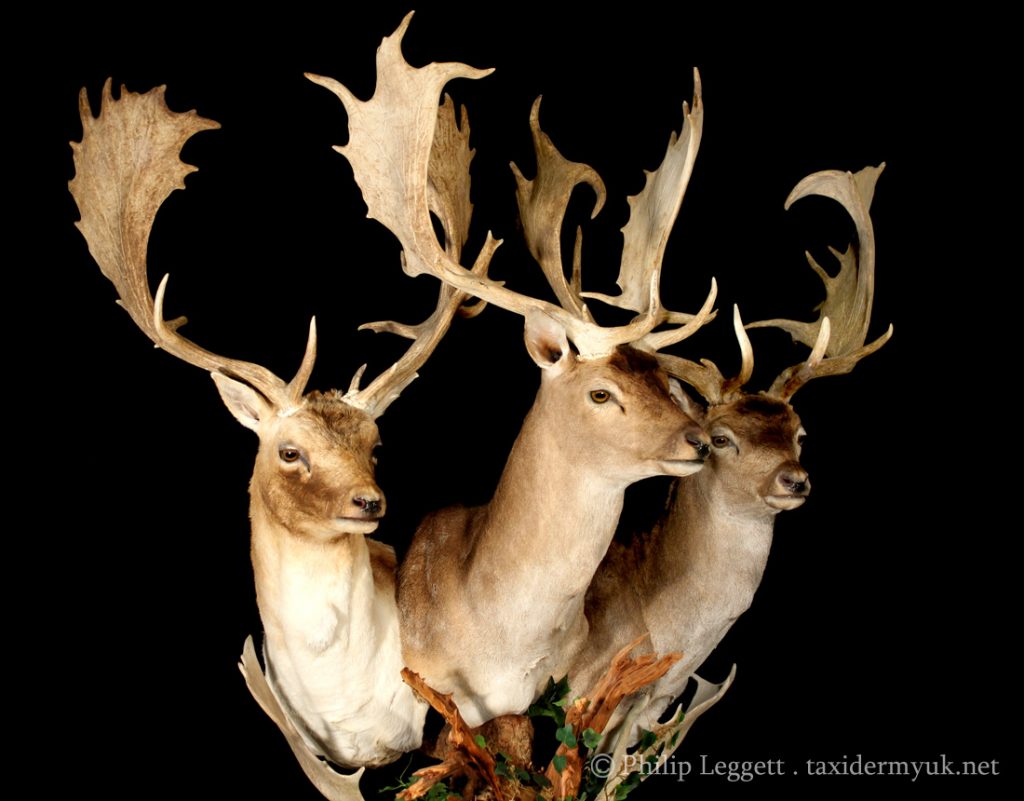 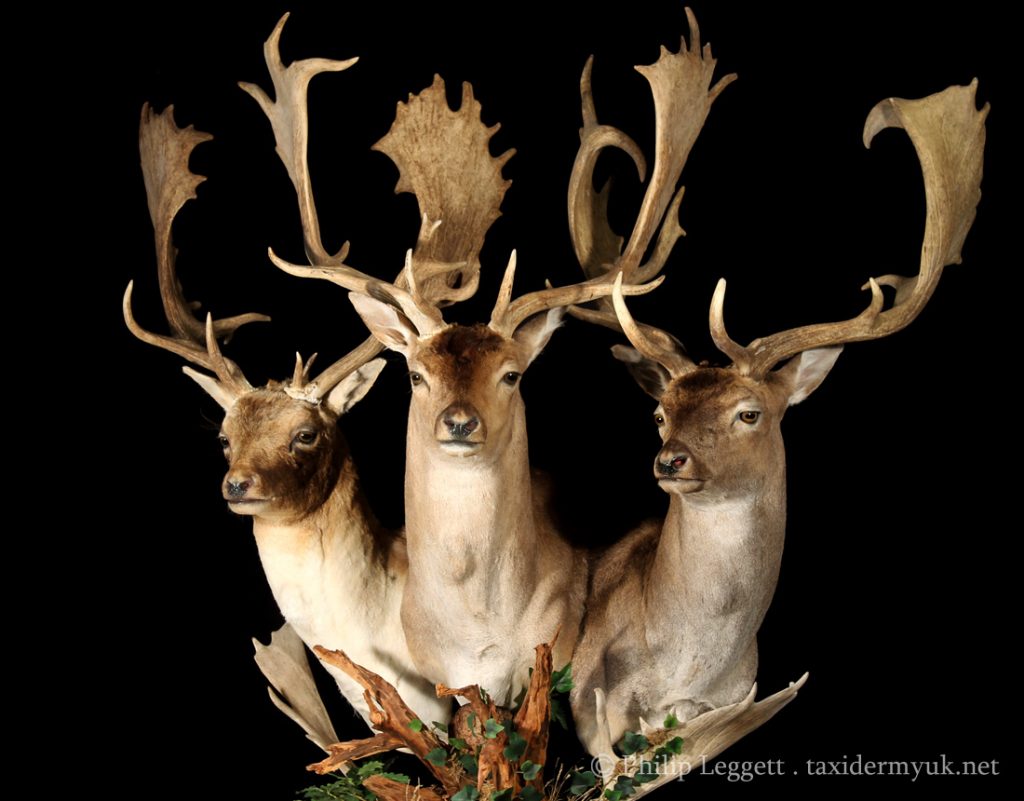 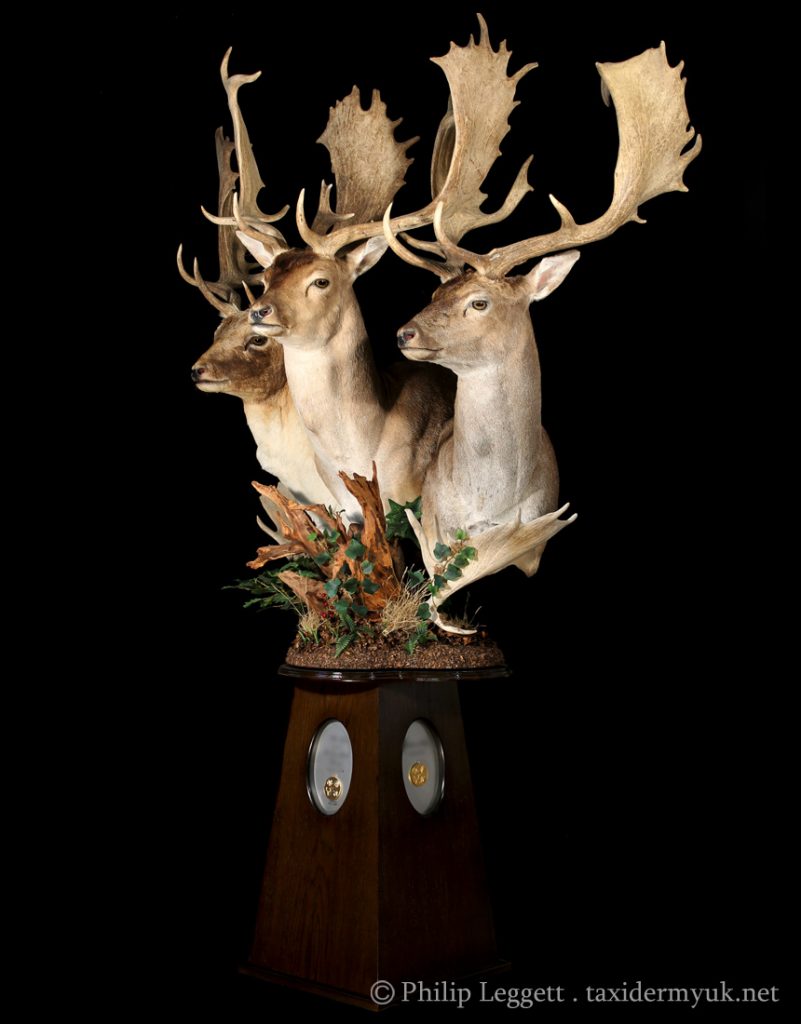 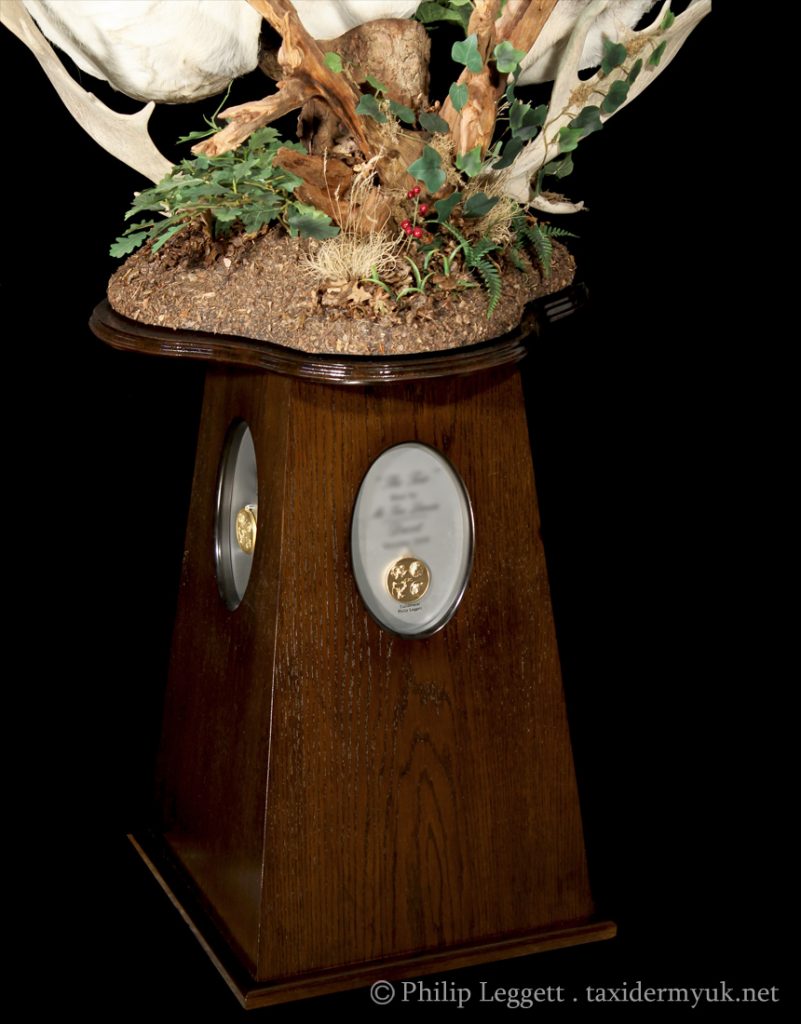 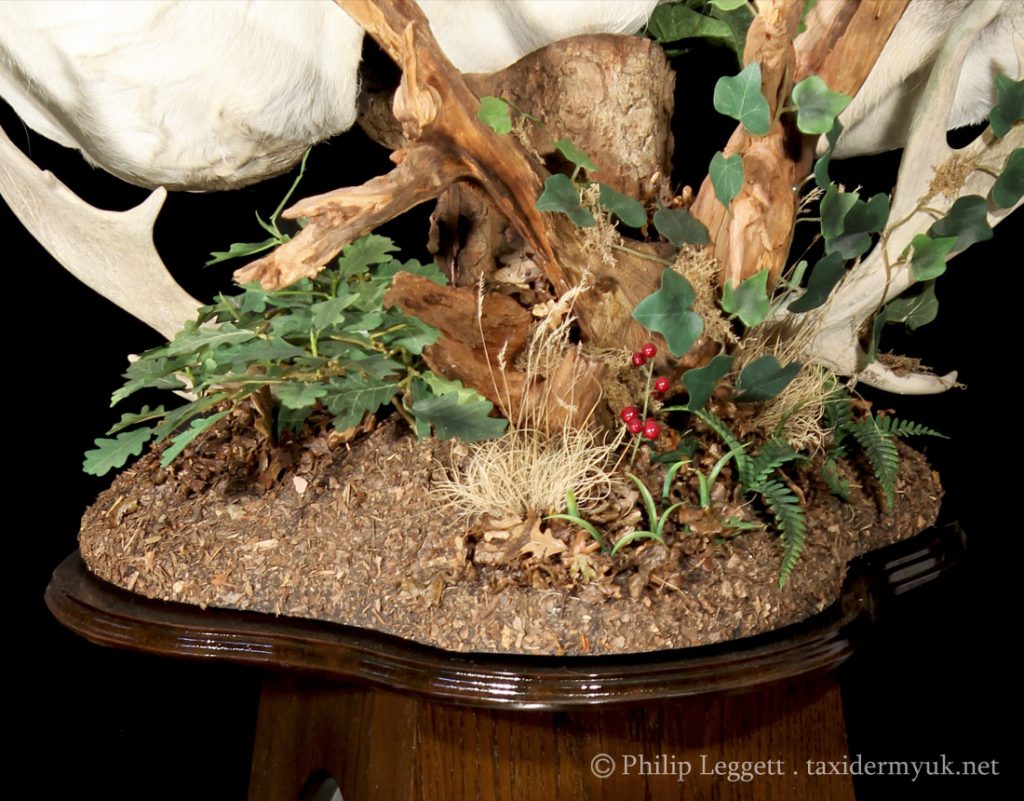 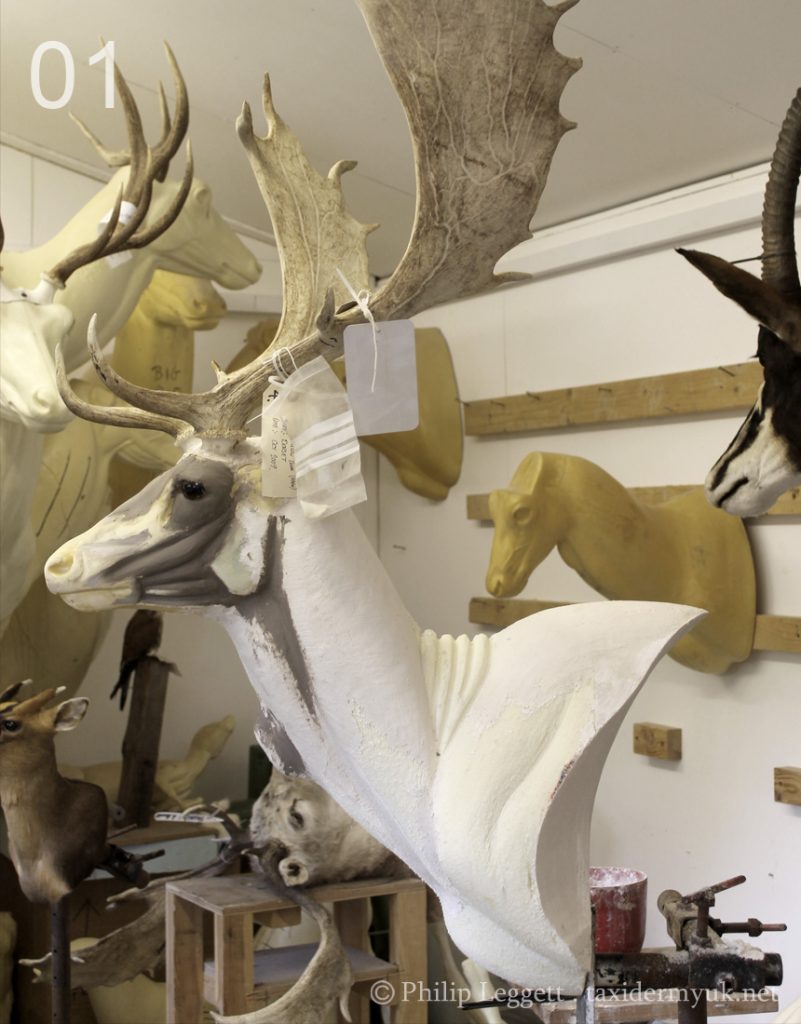 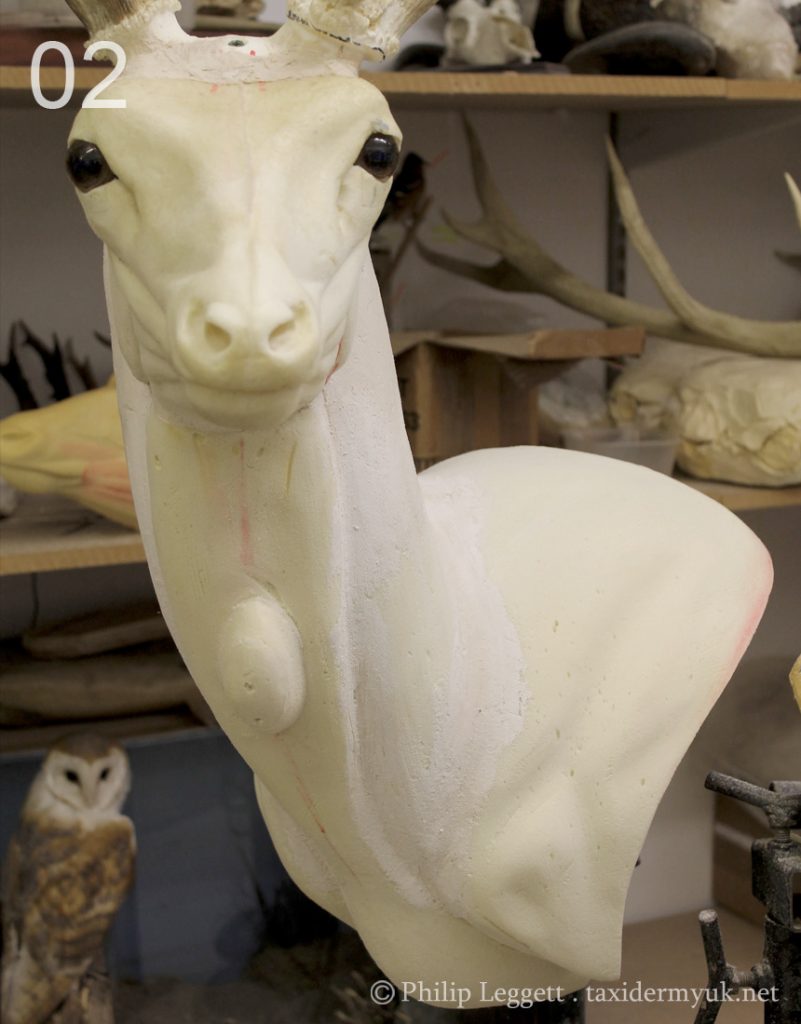 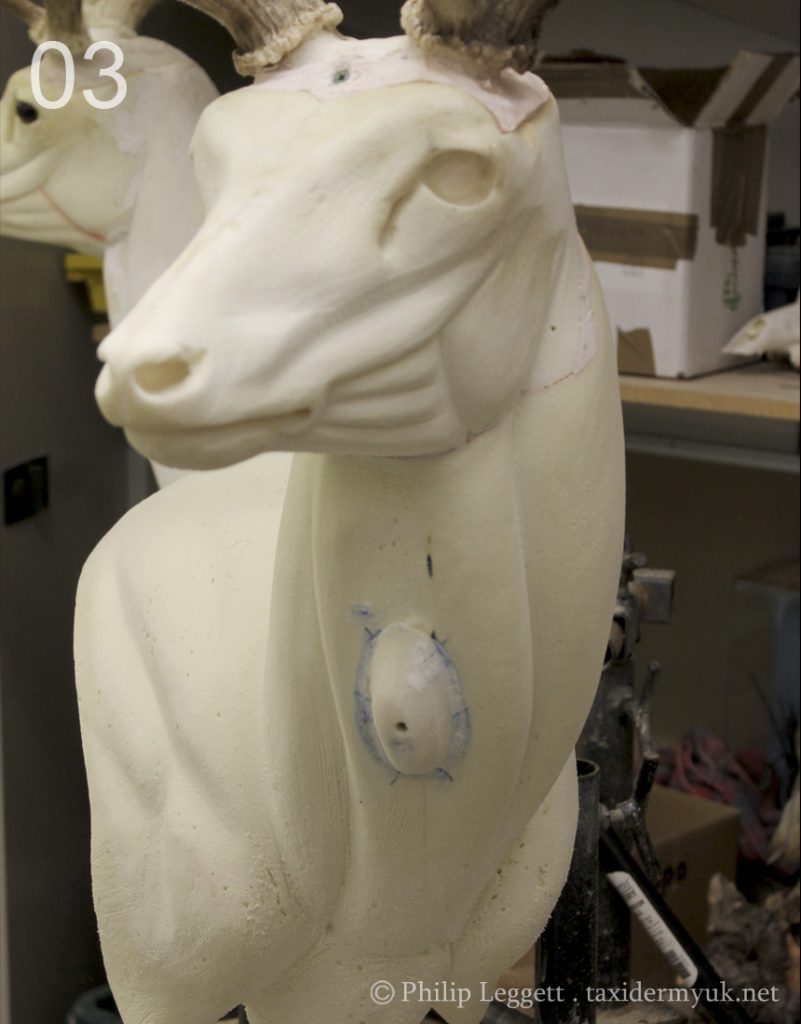 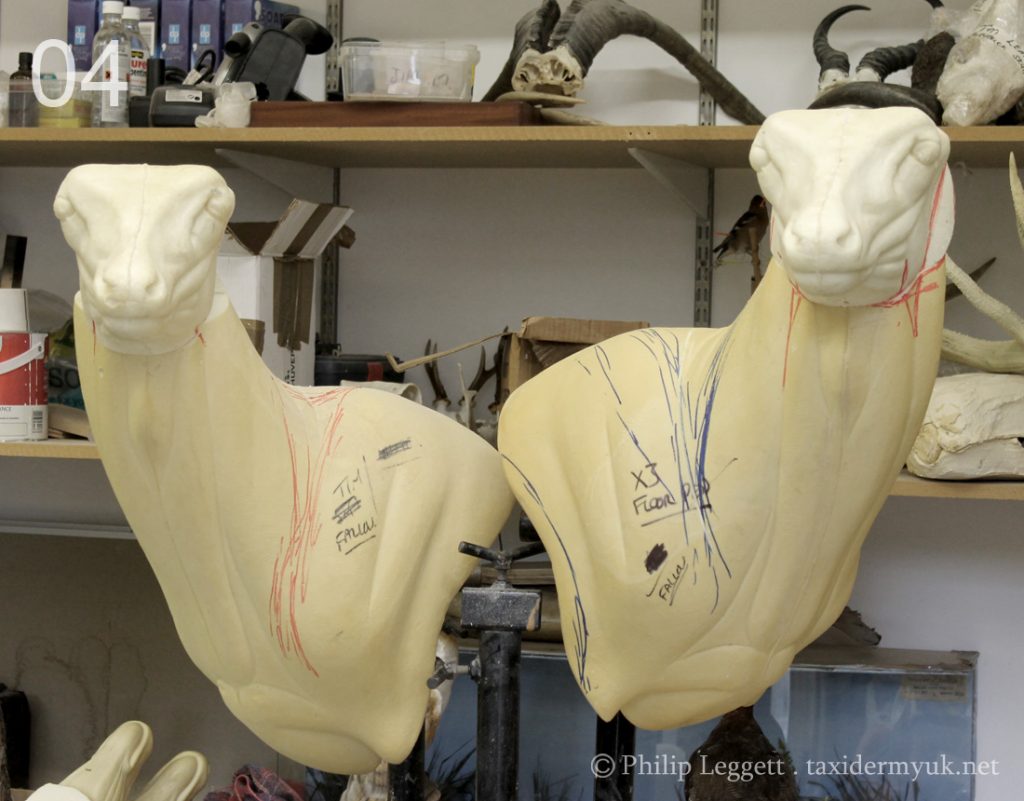 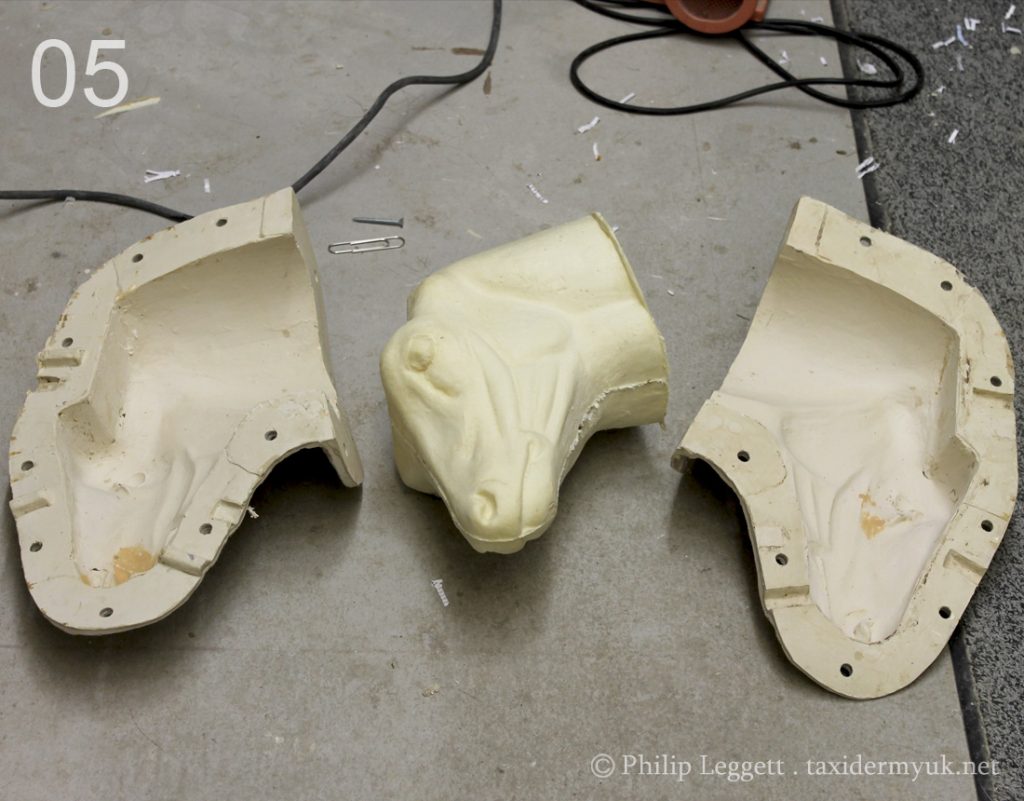 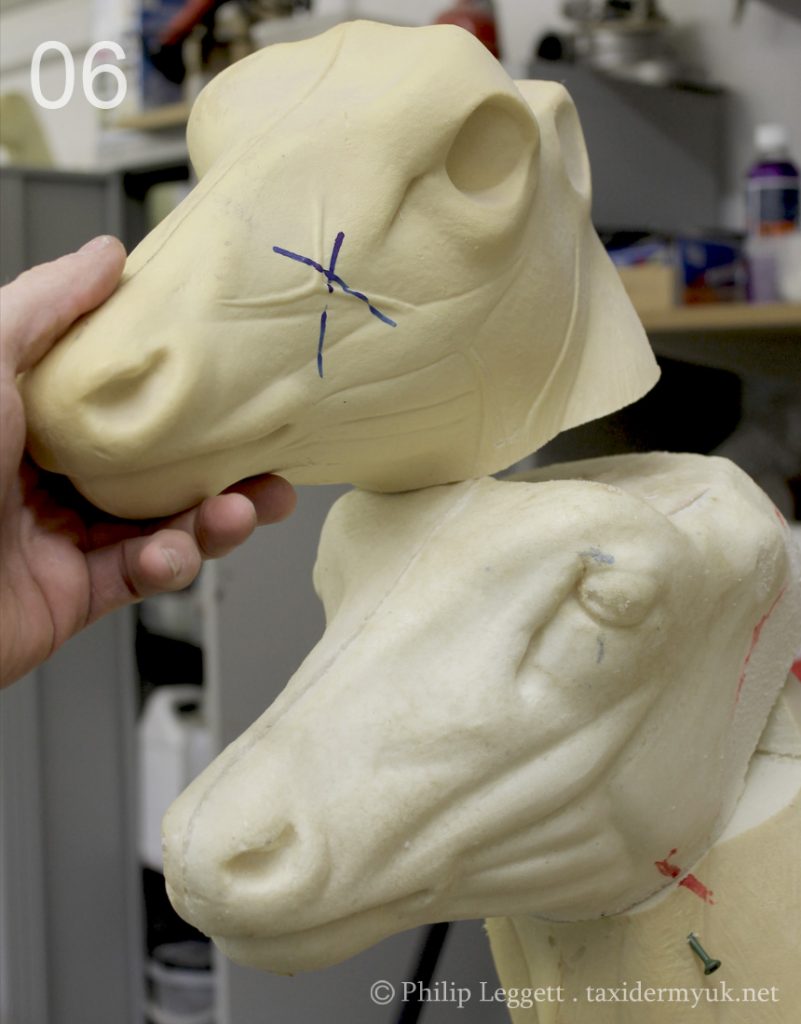 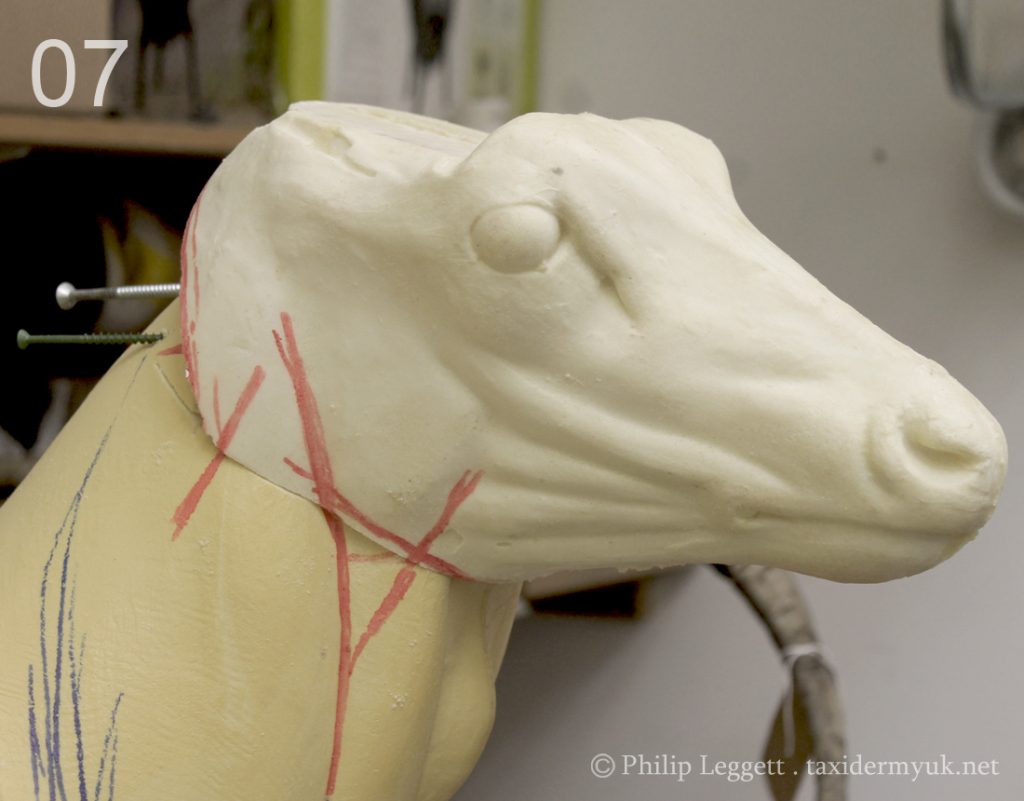 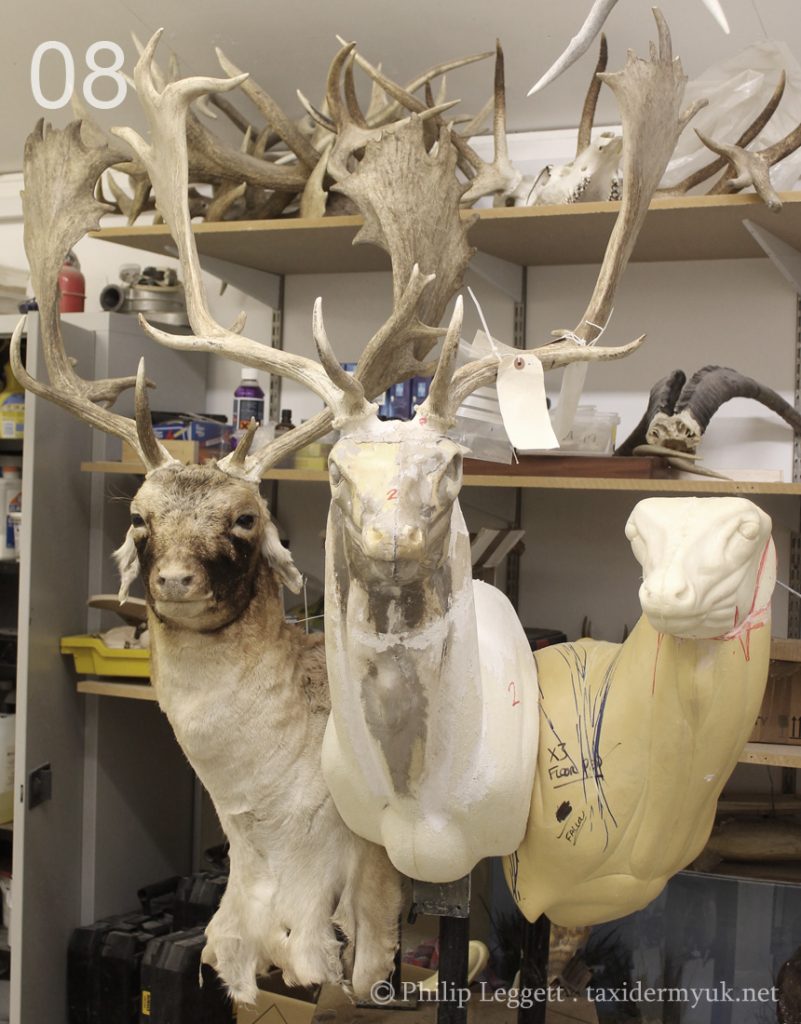 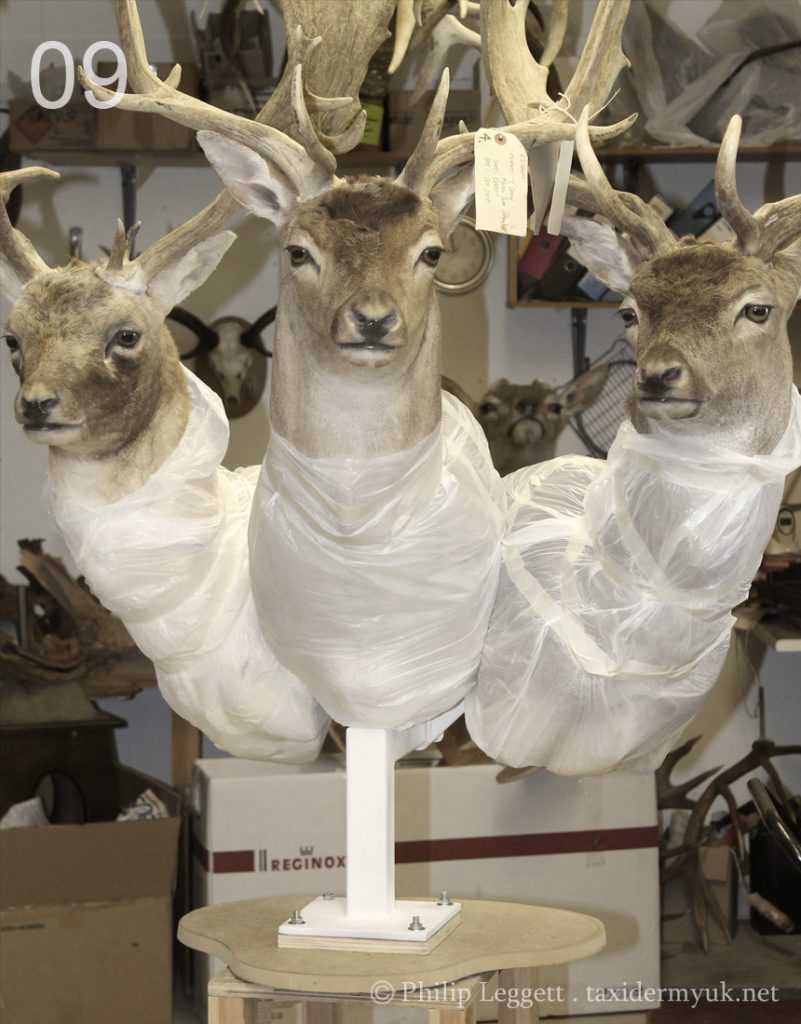 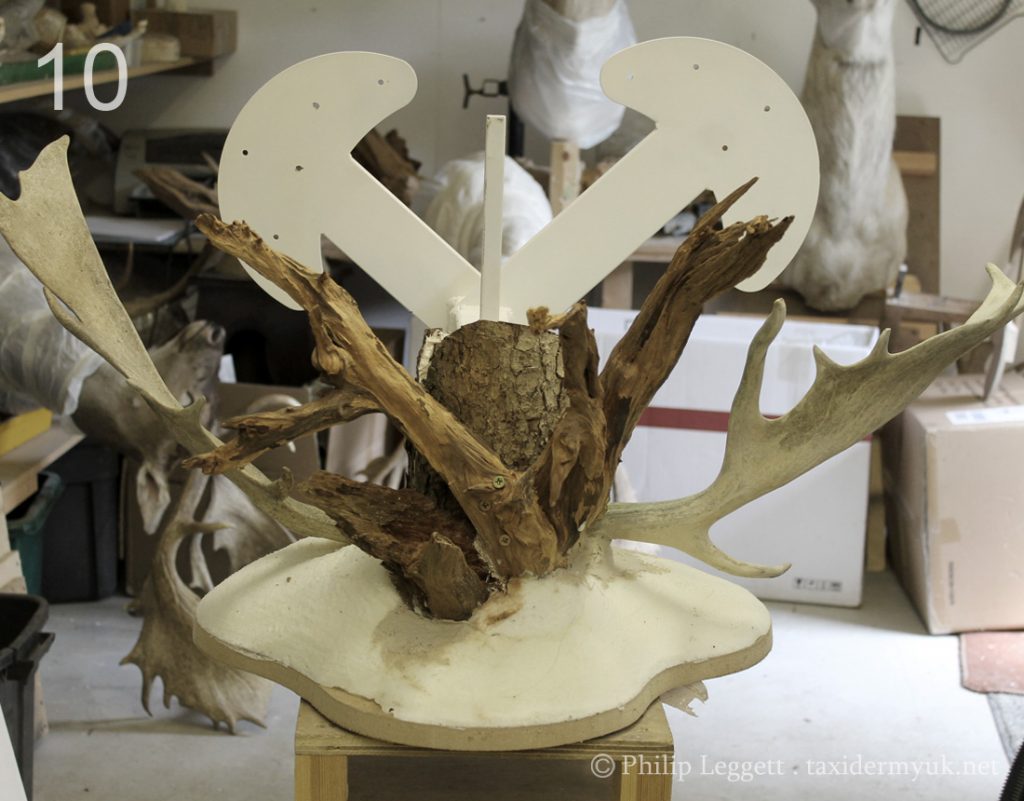 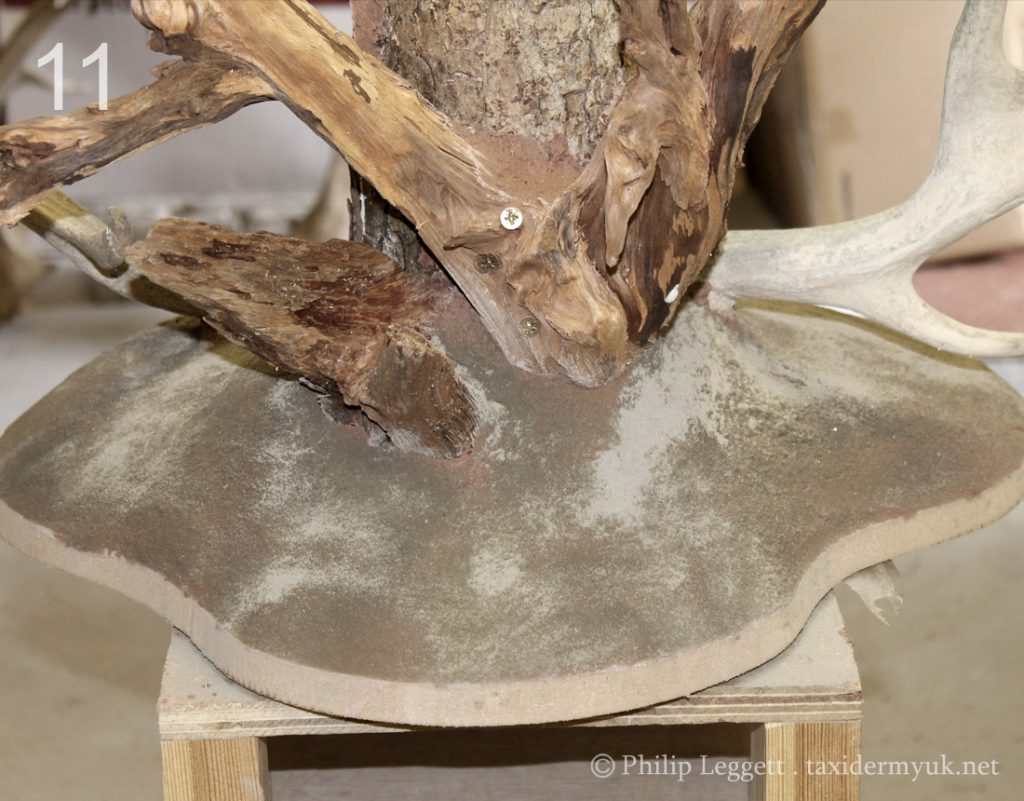 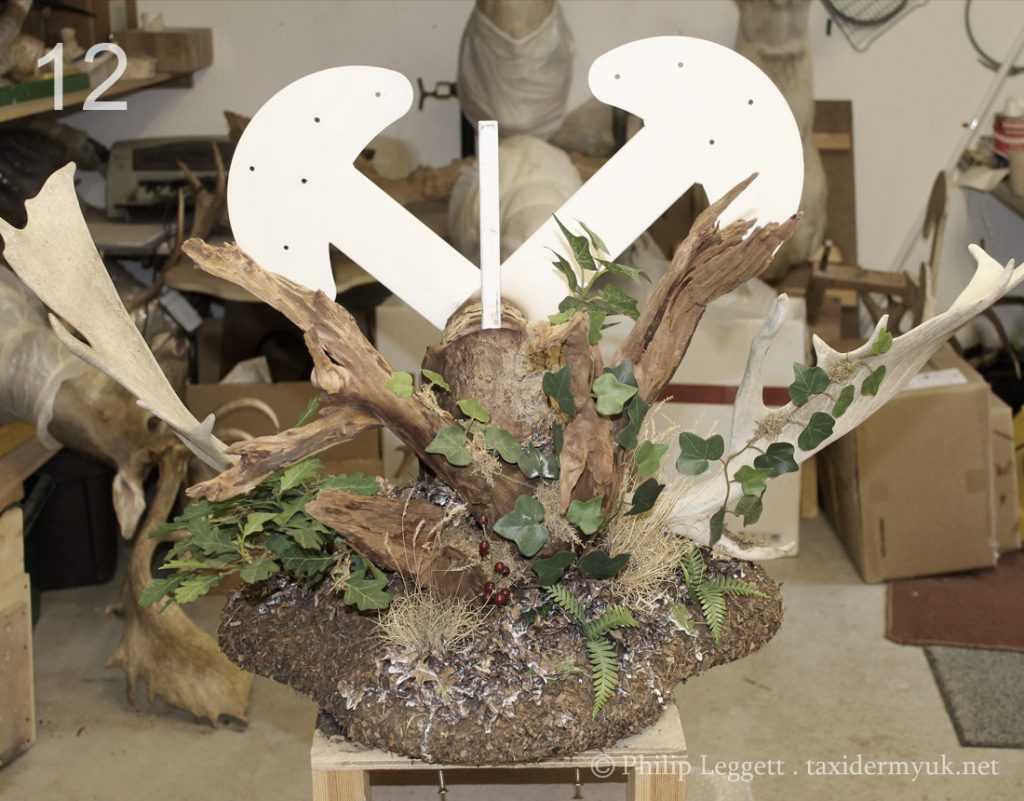 This unique piece The Fallow buck trio consists of three very large Gold medal Fallow buck pedestal mounts. I selected it for our special projects page because it is an unusual commission and this is an opportunity to show not just the pictures but also explain just some of the thought and work that went into creating it.

Most stalkers in the UK, almost instinctively, opt for the very basic so called traditional straight shoulder mount for their deer mounts. This is unfortunate as, with a small step away from this conventional and most unflattering display option, there are some far more aesthetically pleasing options available to display a hard won and often very expensive animal.  The straight shoulder mount is not only unimaginative but it displays any deer from undoubtedly the very least flattering angle possible. When is the last time you looked at a splendid red stag or magnificent Fallow Buck from 4 feet underneath it, staring up at its chin?

Pedestal mounts are relatively rare as a presentation choice in the UK, a triple pedestal mount still more so, yet they are by far the most complimentary, aesthetically pleasing way of displaying a medium to large deer in an average house.  Of course, they are more costly to do, but when one considers the costs of obtaining a once in a lifetime stag or buck, penny pinching on the one part of the whole exercise which will be the lasting embodiment of the memory for many years after the hunt, seams a little short sighted.

Our client for this piece, a very experienced stalker and deer manager, had culled hundreds of Fallow over several years as part of his work, a few of which were medal class heads. The top three of these heads were selected to become “The trio” Three magnificent Gold Medal Fallow bucks.

We discussed several options, for how best to present the three of them. Space was an issue; three separate Fallow buck shoulder mounts would require a lot of wall space, as well as looking very regimental and formulaic so this was not an option. We needed to come up with something far more efficient, space wise, for the three.  In most houses, ceilings of about 8 or 9 ft are the norm and a large Fallow buck is really too large for wall display because, due to the antlers, they are too low on the wall. However, if you place the same deer on a floor pedestal, the whole aesthetic of the piece changes. The decision was a floor pedestal; the challenge was to get all three big Fallow Buck onto one floor pedestal.

I did some basic sketches to play around with various options and arrangements of the three. Doing sketches and cutting out the individual deer mounts allowed me to play around with the composition and plan the mount. It also helps when showing the client as they can more easily visualise the finished piece.

Once we decided on the composition I planned and designed exactly how the mount would go together on a practical level, in terms of the engineering and how the various components would fit together.

Putting the three bucks on a small floor pedestal requires careful planning and design along with a comprehensive list of materials. There are also some fabrications needed such as welded back plates and the bespoke made floor pedestal. Pieces like this will have many component parts which must be designed and bespoke made.

I used three basic commercial fallow deer forms for the project, none of which were even close to the measurements taken from the three big bucks I had to mount. Most forms are little more than a rough approximation of the animal they purport to be for, and will require varying degrees alteration to correctly fit the specific anatomy of a particular deers` skin. Two forms were from the U.S and the heads bore no resemblance whatsoever to the anatomy of the three heads I and to mount; They looked more like a young mule deer than Fallow. I decided to sculpt an entirely new fallow head, mould it and then cast it in P. U foam and used them instead (See pic 6,)

The top of the pedestal is both the habitat setting for the composition, and the main supporting structure, it holds the purpose made steel back plate support, which the two outer Bucks are fastened to, and the centre buck which sits on a vertical steel support that it slides down on to. (Pic 9). For the habitat scene I designed a small diorama reminiscent of autumn to compliment the Bucks and create the atmosphere of the late September Fallow Rut

I used two naturally cast fallow buck antlers to frame the piece and draw the eye up from the habitat scene, (Pic 10,11,12)

The whole piece sits on a bespoke made polished wood floor pedestal with three oval cut outs. Each cut out is hold a large brushed aluminium plate machine engraved with the legend pertaining to each buck. The Gold medal for each buck is attached to the engraved legend.

This kind of piece requires a great deal of skill, time, effort and materials to produce and this will be reflected in the fee to produce it. We are happy discuss this type of work with those who are seriously interested

This mount consists of the following components and work.