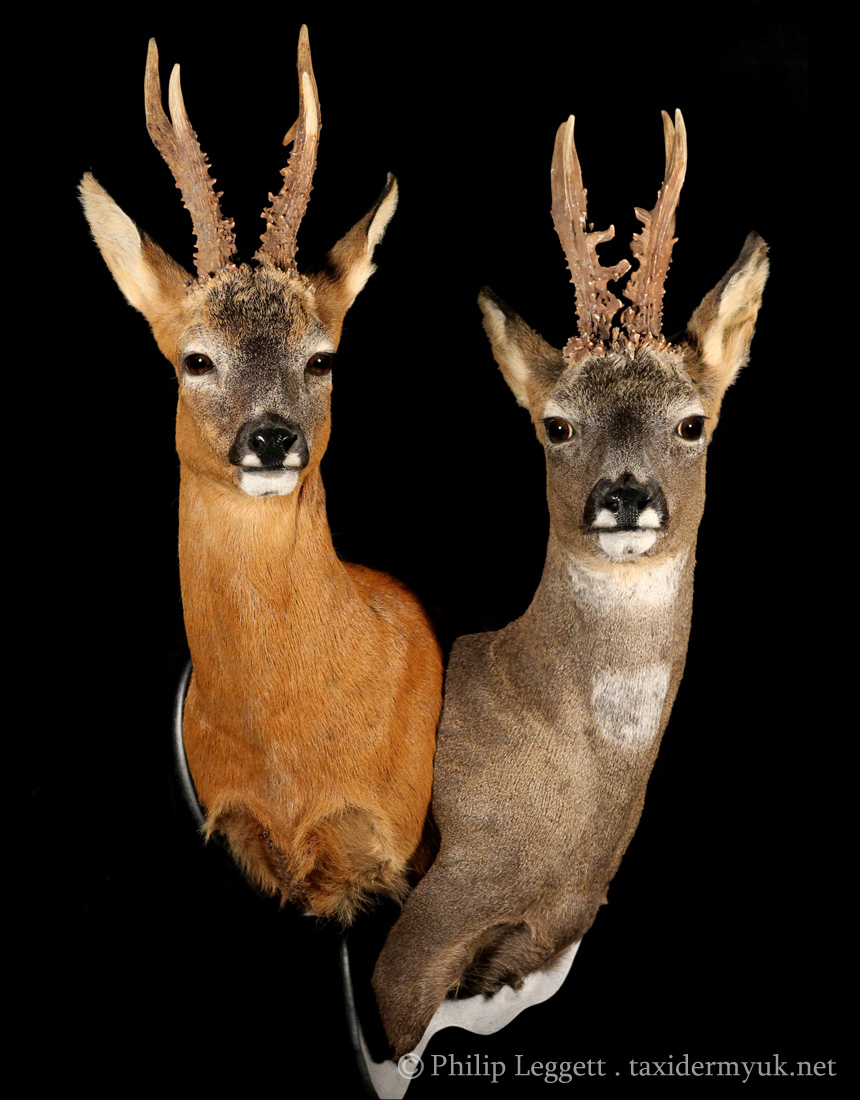 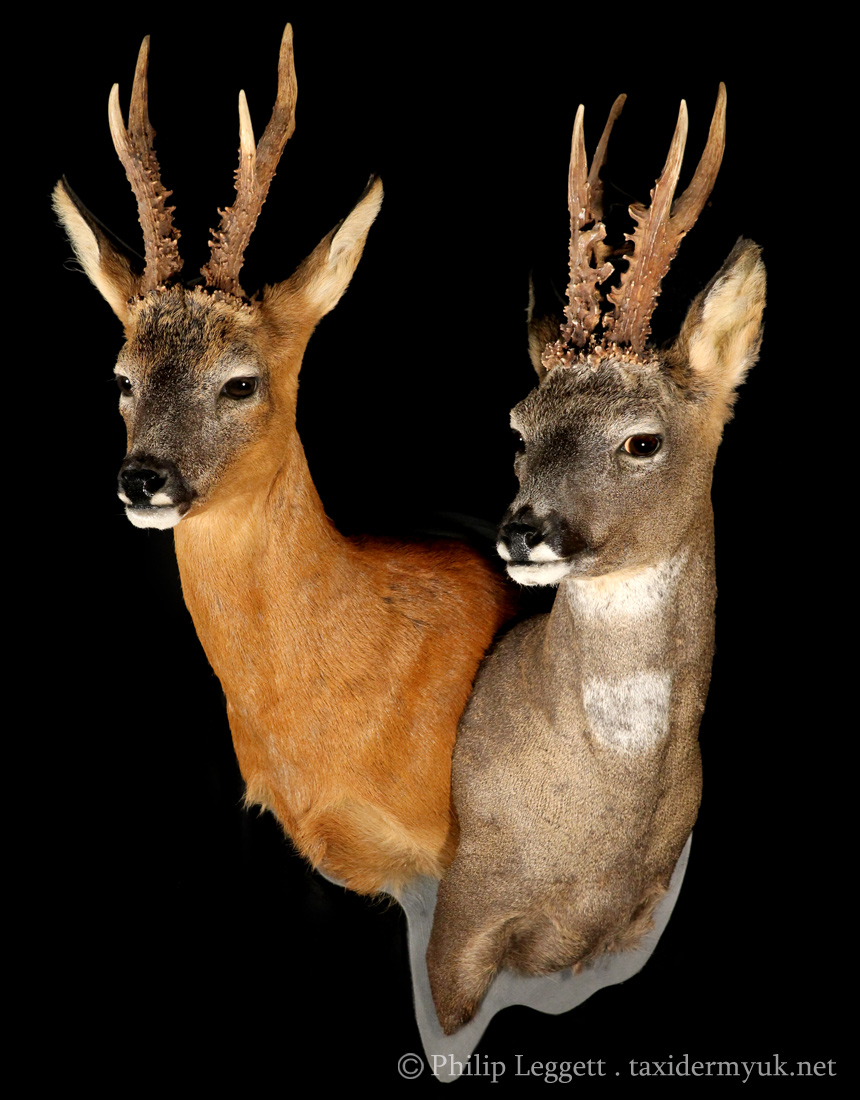 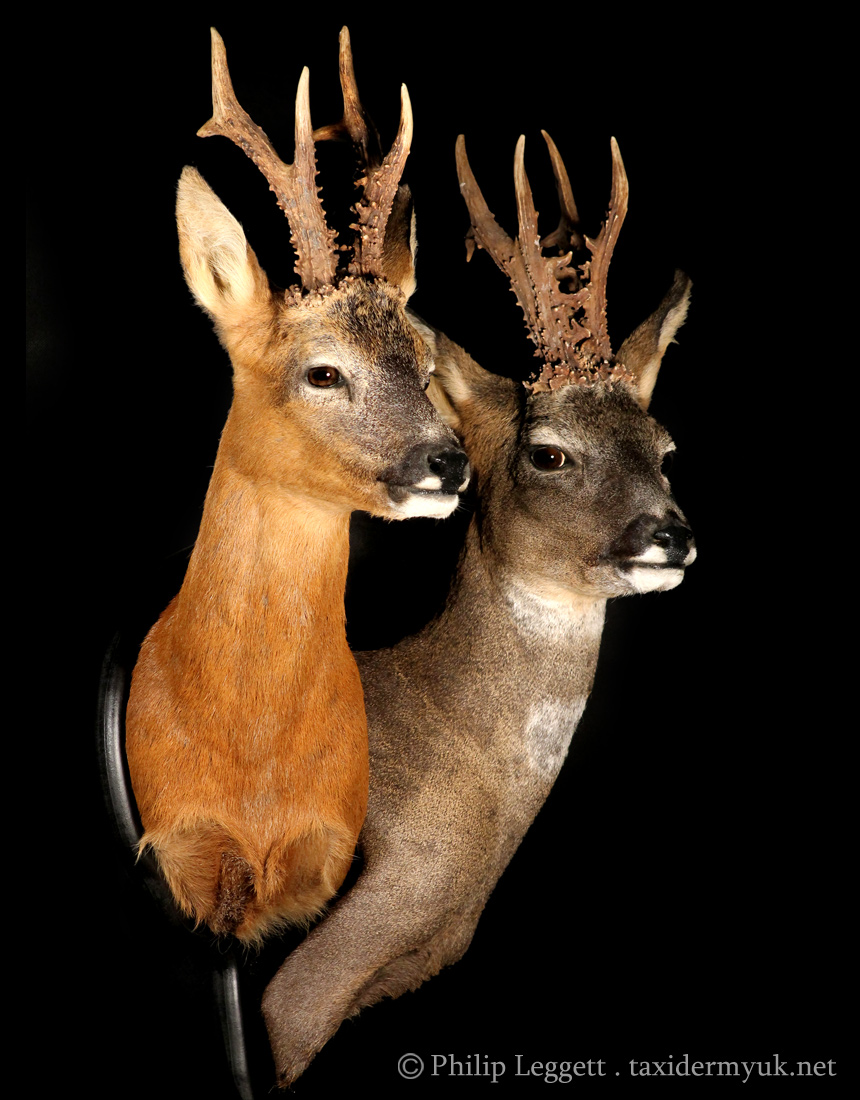 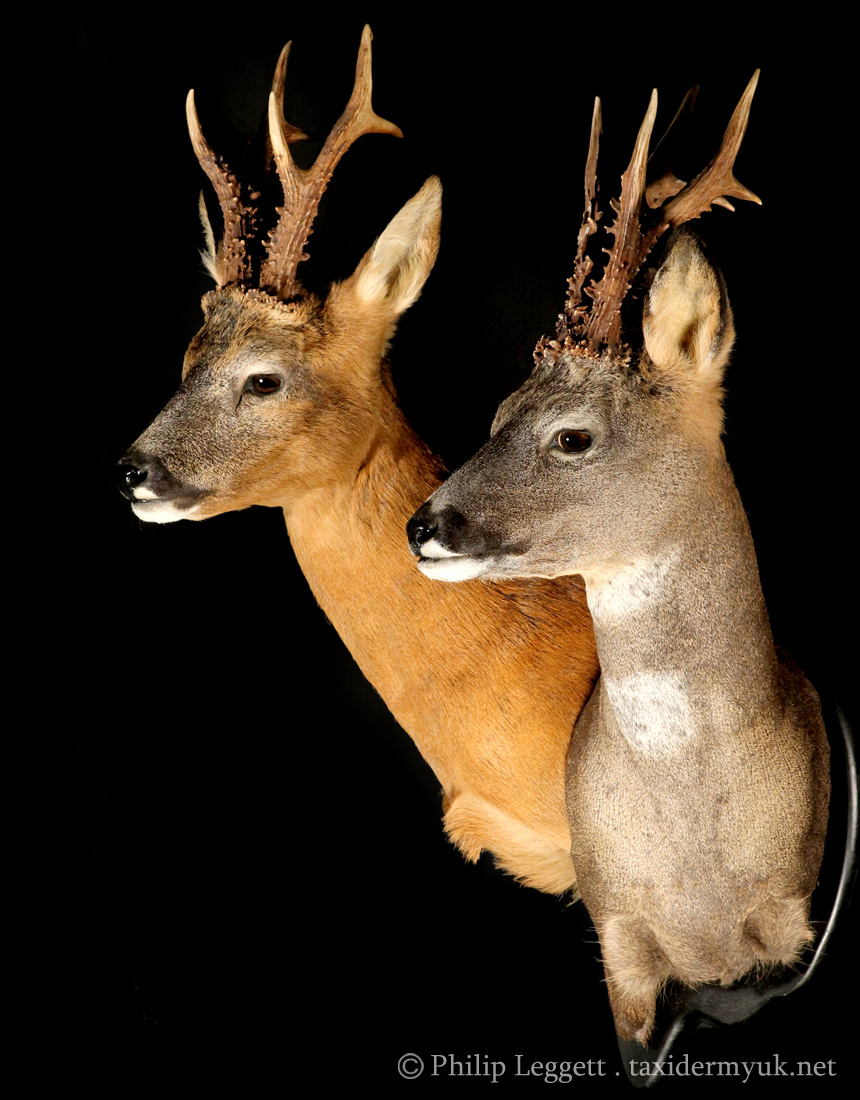 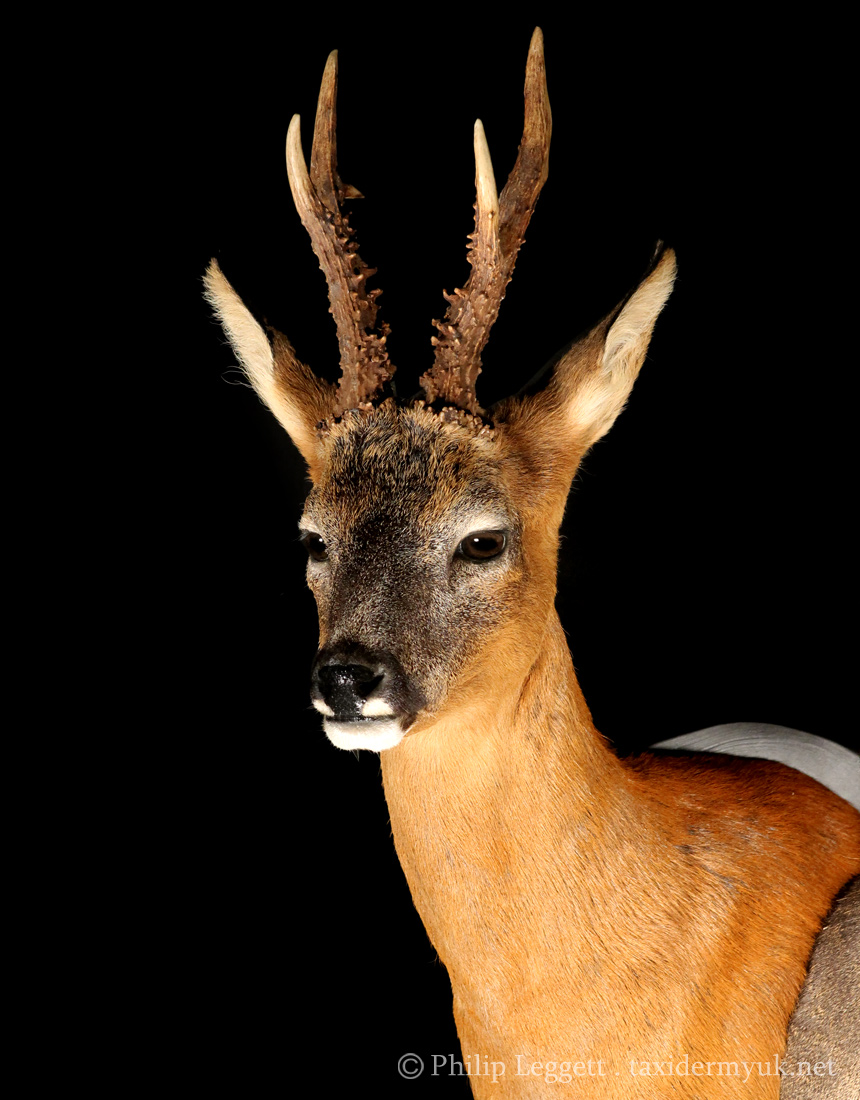 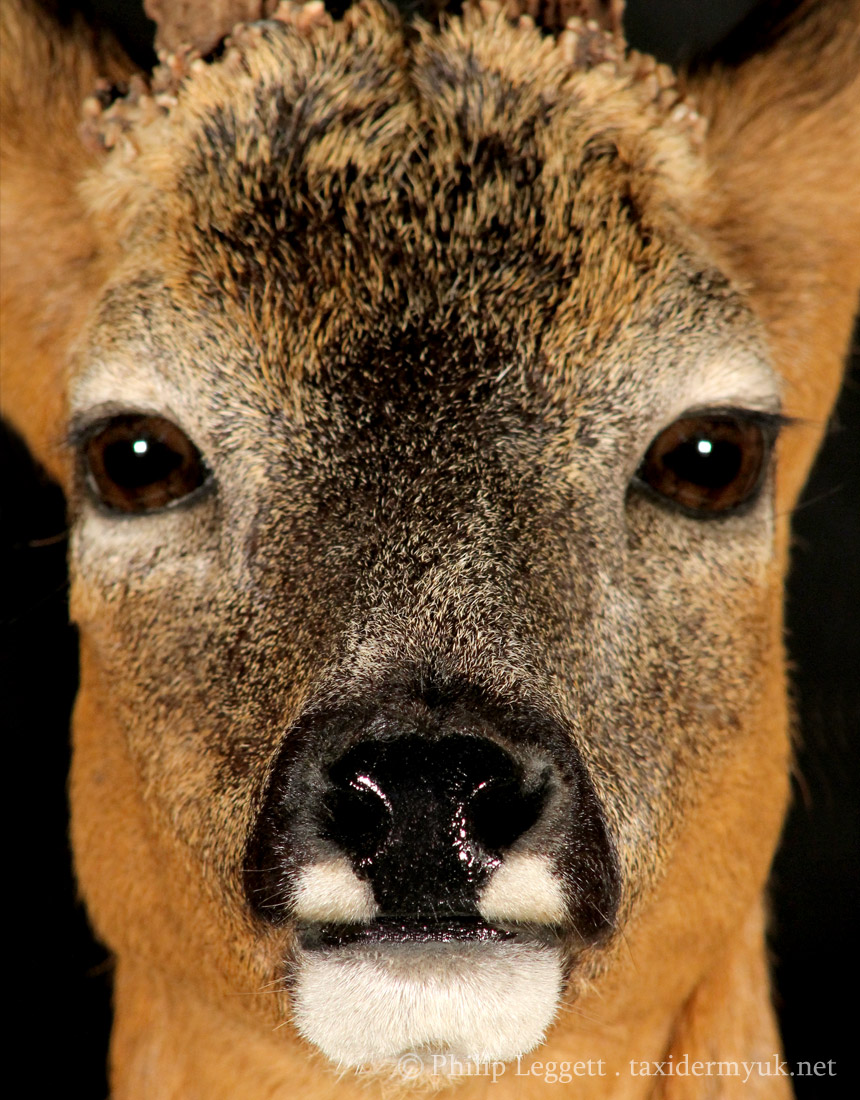 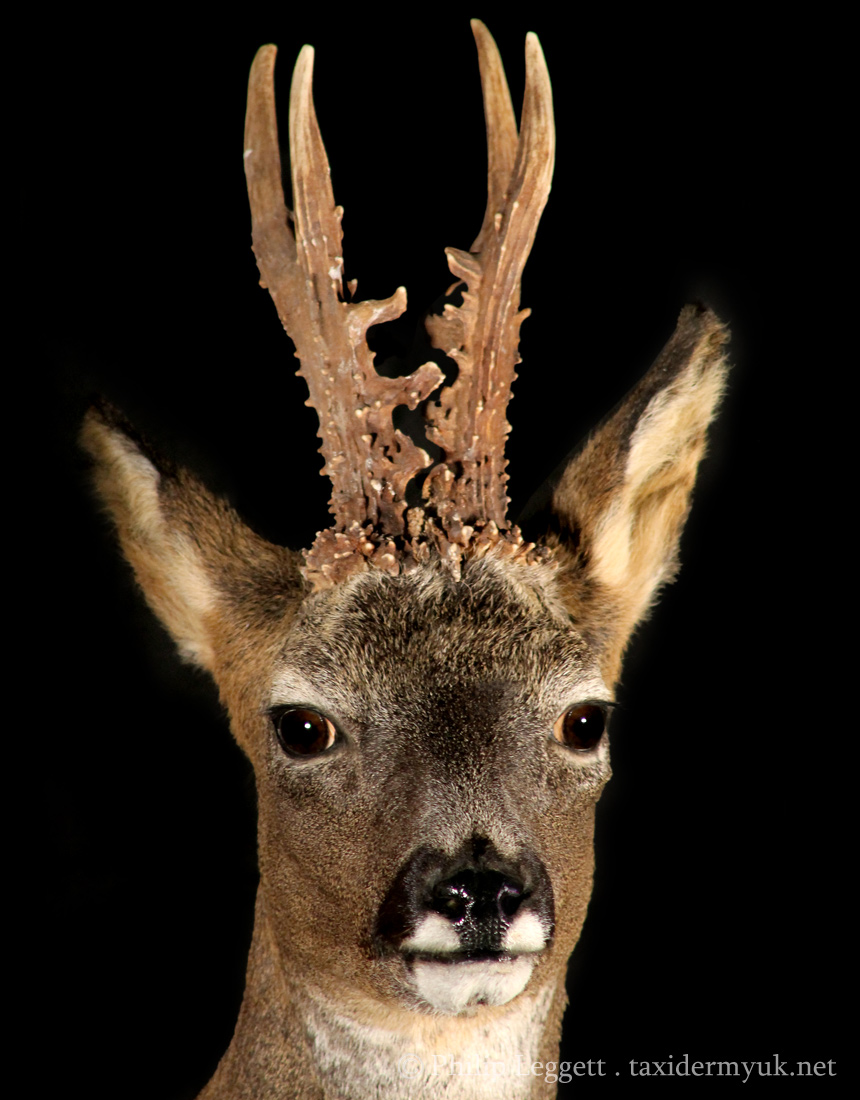 These two medal bucks are respectively a UK CIC Gold medal (winter coat mount on the right) and a Silver medal (summer coat left). Keen deer stalkers will no doubt have noticed that one of the two is in his winter pelage which, of course, suggests a medal buck taken in winter.

For clarity, both of these medal heads were taken in season, however, the cape (skin) on the larger of the two, on the right, was in very poor condition and unsuitable to mount with its antlers. Once they had been measured and certified we provided a winter Roe buck cape to replace the unsuitable summer one. (The replacement cape was taken from a buck culled completely separately, elsewhere in Scotland, by a professional deer manager, as part of an out of season licence. See foot of page and http://www.snh.gov.uk

The open season for the Roe buck in the UK runs 1st April to October 31st (in England/wales) and 1st April to October 20th (in Scotland), therefore it is seldom that a full winter coated Roe buck would be taken as they are changing coat (moulting).   The winter coat of the roe contrasts markedly with the summer coat, both in texture and colour, making this an unusual mount. The summer coat is a deep red russet brown colour which is very fine and short. The winter coat is longer, very dense, silver grey sometimes bordering on black. Characterised by large pale patches on the underside of the chin and front of the throat known as the “gorget patches” (Gorget is French meaning ‘throat’) these can be more apparent on some roe than others.

This is an offset shoulder mount (also called a wall pedestal).

As the two were both taken by the same stalker and both achieved medals, the client opted to have the pair mounted together as offset shoulder mounts. This type of presentation is in my view far superior to the traditional straight shoulder mount, as it shows the deer in a far more natural way. The “traditional” ears front regimental straight shoulder mount is probably the least flattering angle to observe a mounted deer or antelope of any species from. They hide just about every pleasing trait and feature of the deer, leaving the viewer with a brisket and chin to look at. Most of us when viewing a deer will see it side on, glancing head slightly turned to its left or right. The offset shoulder mount emulates this natural pose.

Ears:
A deer which is alerted to something directly in front of it will direct its gaze with both ears forward to concentrate its attention, but a relaxed deer will usually have one ear forward and the other listening for anything behind it. I try to capture the deer here in a more relaxed attitude, with one ear tilted slightly back.

In Scotland, there is a general authorisation which allows occupiers suffering damage to improved agricultural land or enclosed woodland to control deer in the close season. Female deer over 12 months old may not be killed under this general authorisation during the period 1 April to 31 August. Further details can be obtained from Scottish Natural Heritage (SNH)  http://www.snh.gov.uk (search out of season licensing).