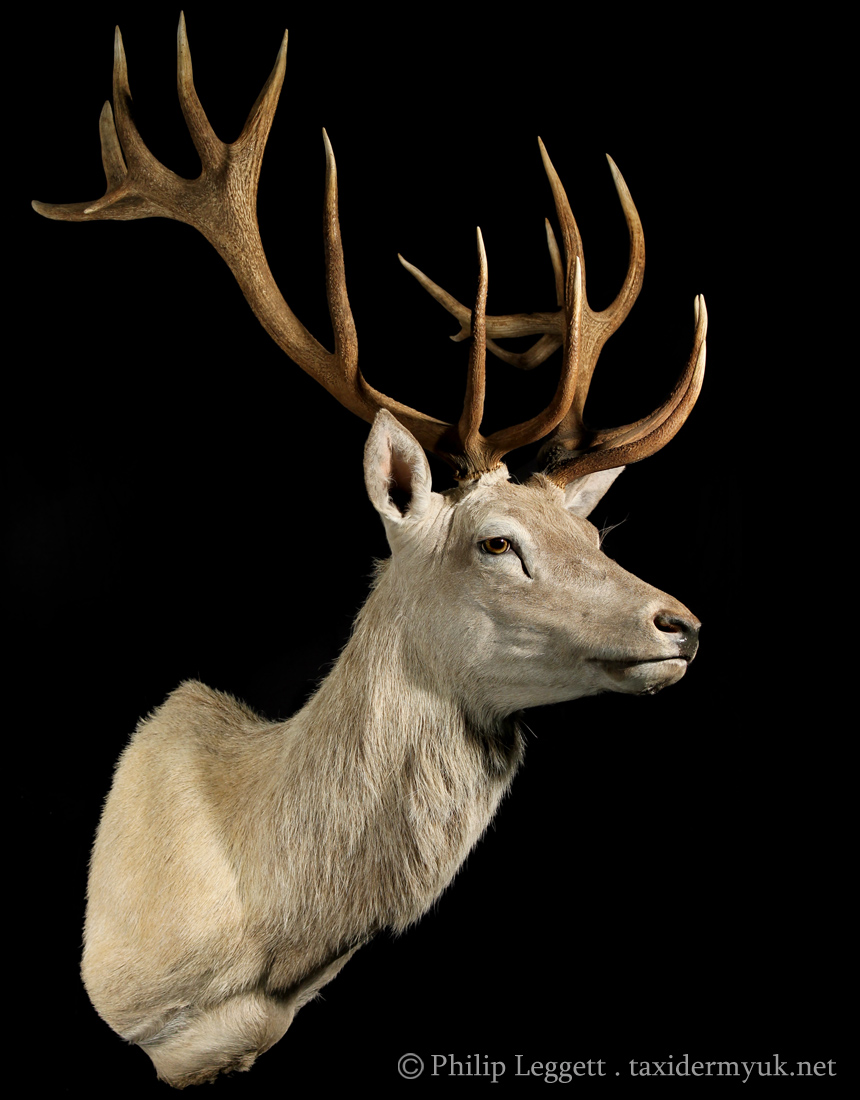 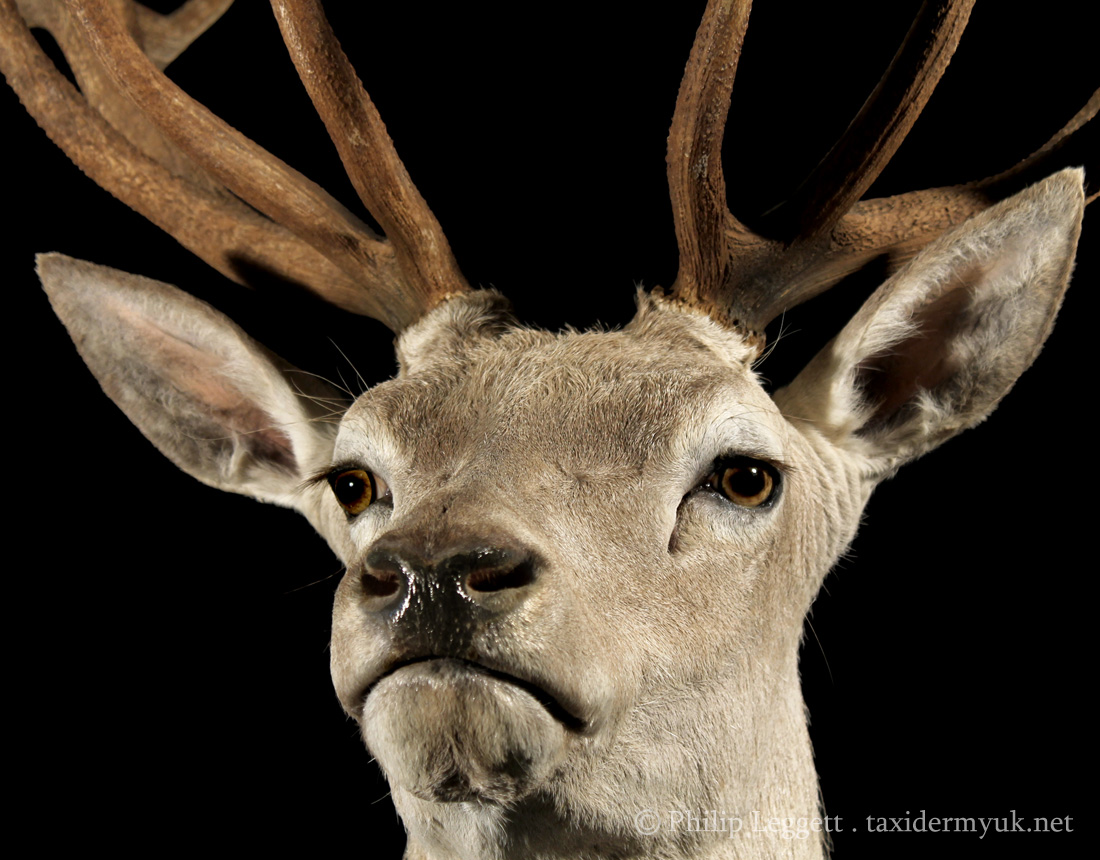 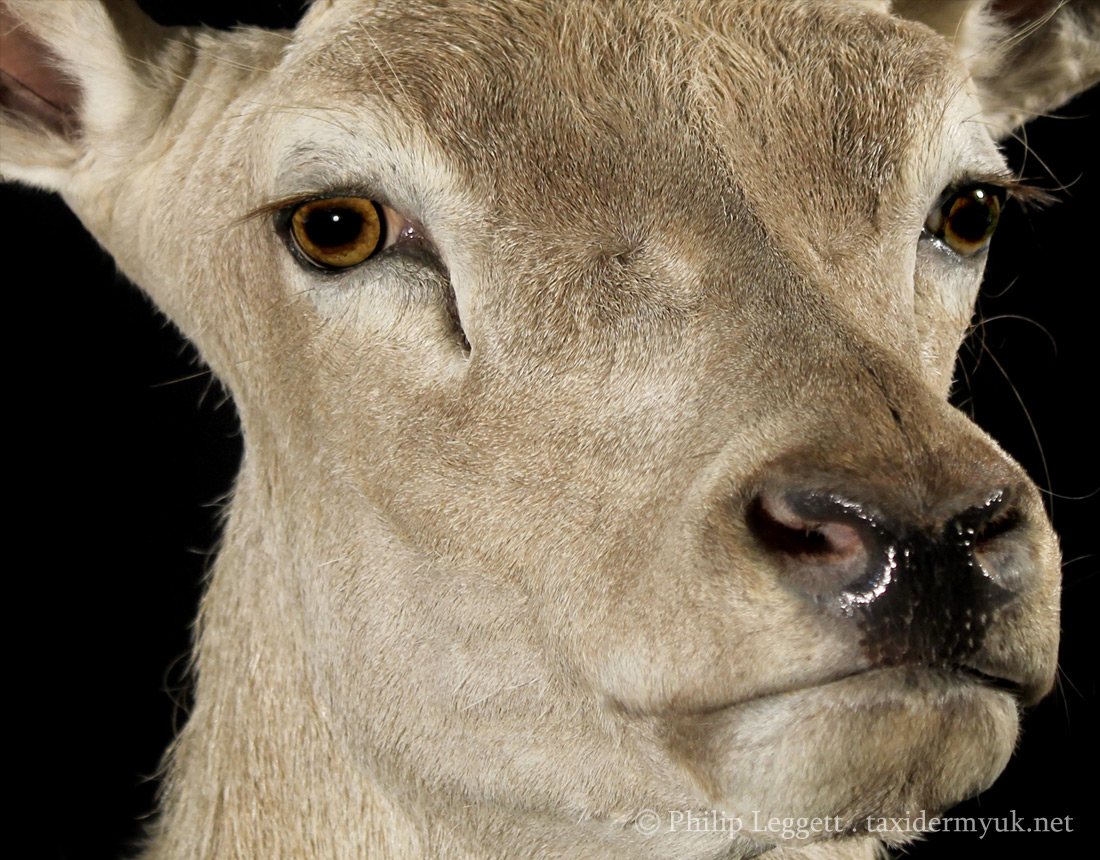 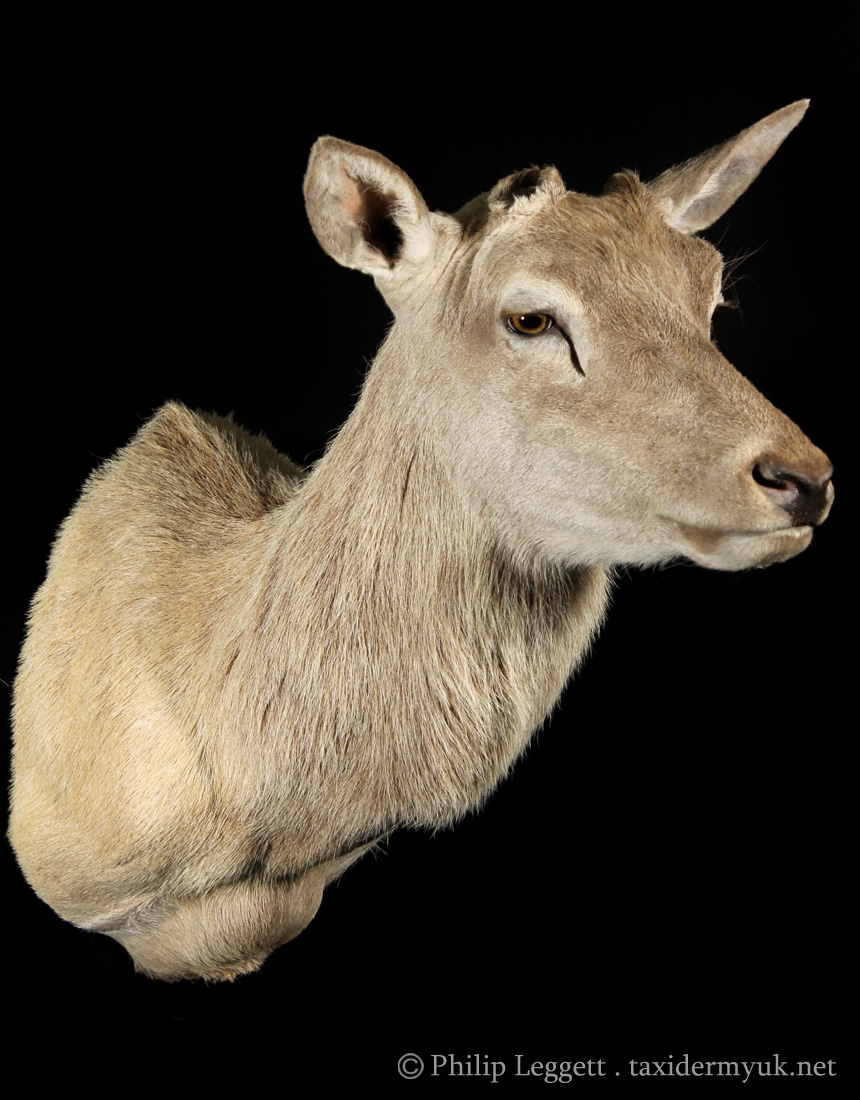 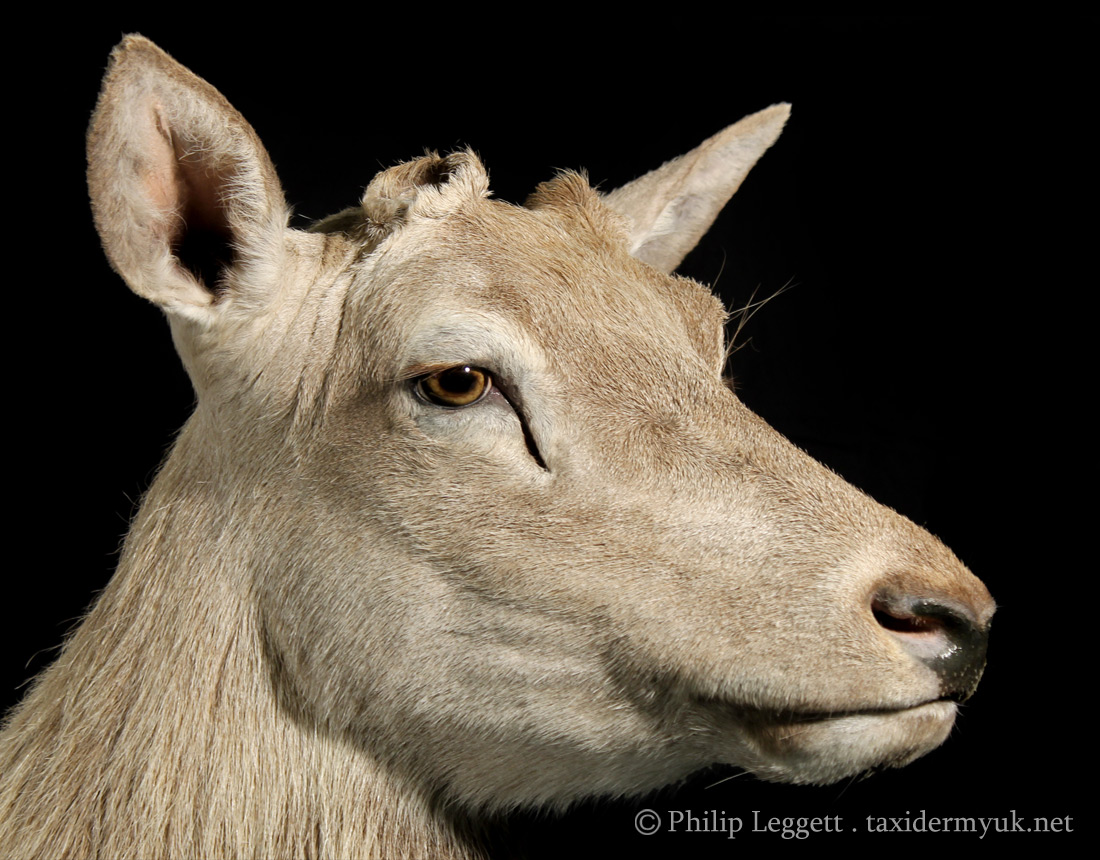 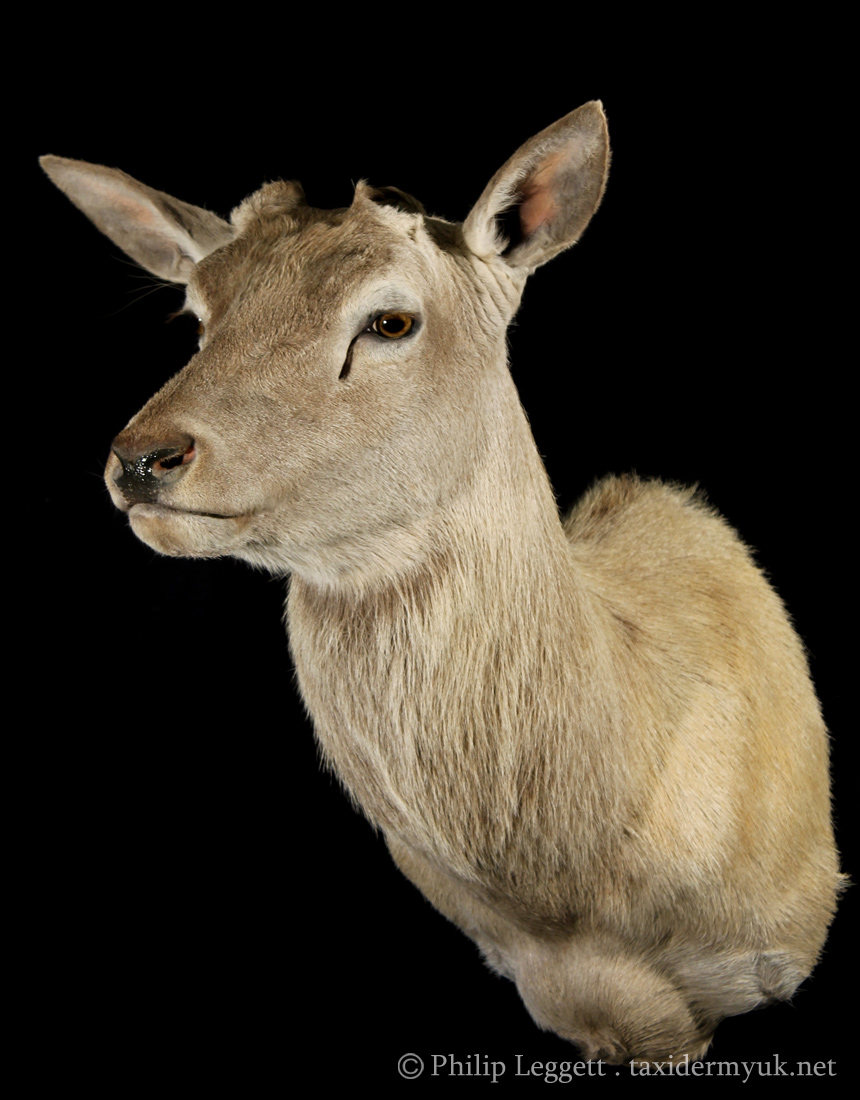 A white (leucistic) red deer in the wild is a very rare sight. A white stag, of large size, still more so. Few young male deer, of any hue, will become the master stag in a herd. The chances of one individual white deer, surviving to be ten or twelve years old, is rarer still. Consequently, if a white stag does make it to adulthood, it is a remarkable feat of survival. These white deer are often referred to as being Albino however, although Albinism does occur in deer, most are usually leucistic and not Albino. The basic difference is that, in albinism, the entire animal is devoid if pigmented cells, hence the eyes will be pink as will the nose and even the hooves. In leucism, only the hair is affected to varying degrees and shades, the nose, eyes, and hooves will usually be normally coloured. Leucism is not restricted to deer, all animals, including birds can be affected by it. The white colouration may well make them more susceptible to predation as they will stand out more.

It is unsurprising then, that white stags are viewed as creatures of myth and legend, written into folklore going back generations. They are also regarded as being “untouchable” due to their extreme rarity. Sadly, in wild populations, they can often be targeted by unscrupulous operators or poaching interests. For a professional wild deer manager, the white deer will usually be treated much as any other deer in the herd and only be removed or culled if, or when, the need arises and not due to its colour, though this may be misunderstood by casual commentators and observers, who may feel it should be left alone in any circumstances.

While leucism is relativly rare in wild deer, it is far less so in Park or fenced herds. This is simply because, once a leucistic deer is identified, it can be selectively bred from to produce more, until the variant becomes more common in the herd. Some deer parks have bred these leucistic red deer and now have a good gene pool from which to produce them. These white deer are then managed just the same as all other deer in the herd.

The white stag shown is from a deer park, it is not a free ranging wild stag. We have never yet been asked to mount a wild leucistic Red deer stag (though we have done a Sika (link).  A close look at the antler size and development suggests this stag may also have the genes from a wapiti in it.

This 18 point stag was culled quite early on in the season, so he was still slightly in velvet, and also had not yet begun to develop the heavy muscle mass so apparent towards the Octobetr rut. He is mounted as a straight shoulder mount, on an altered straight shoulder mount basic commercial form. No matter how basic or simple the mount, we always alter the form substantially to make sure it reflects very accuratly the animal we are working on. Forms are generic, deer are individuals, we never stretch the skin and force it to fit the skin to the form.

This consists of the following components: