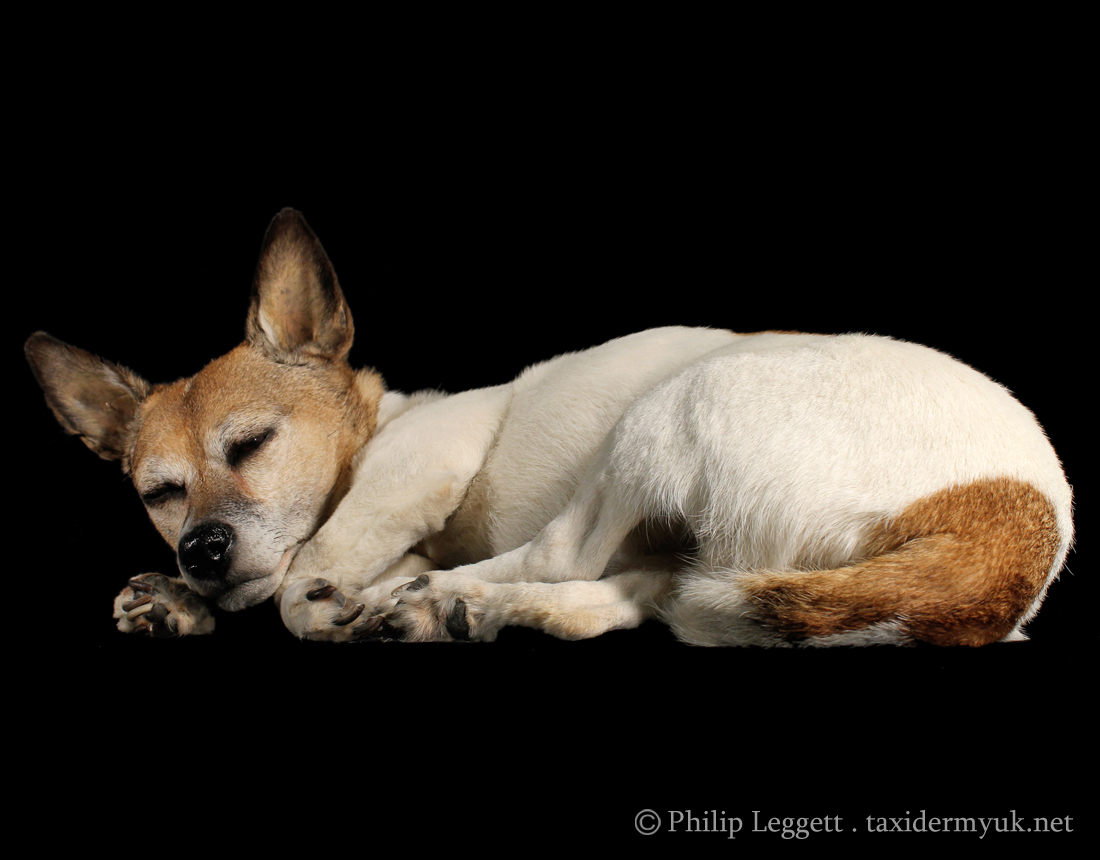 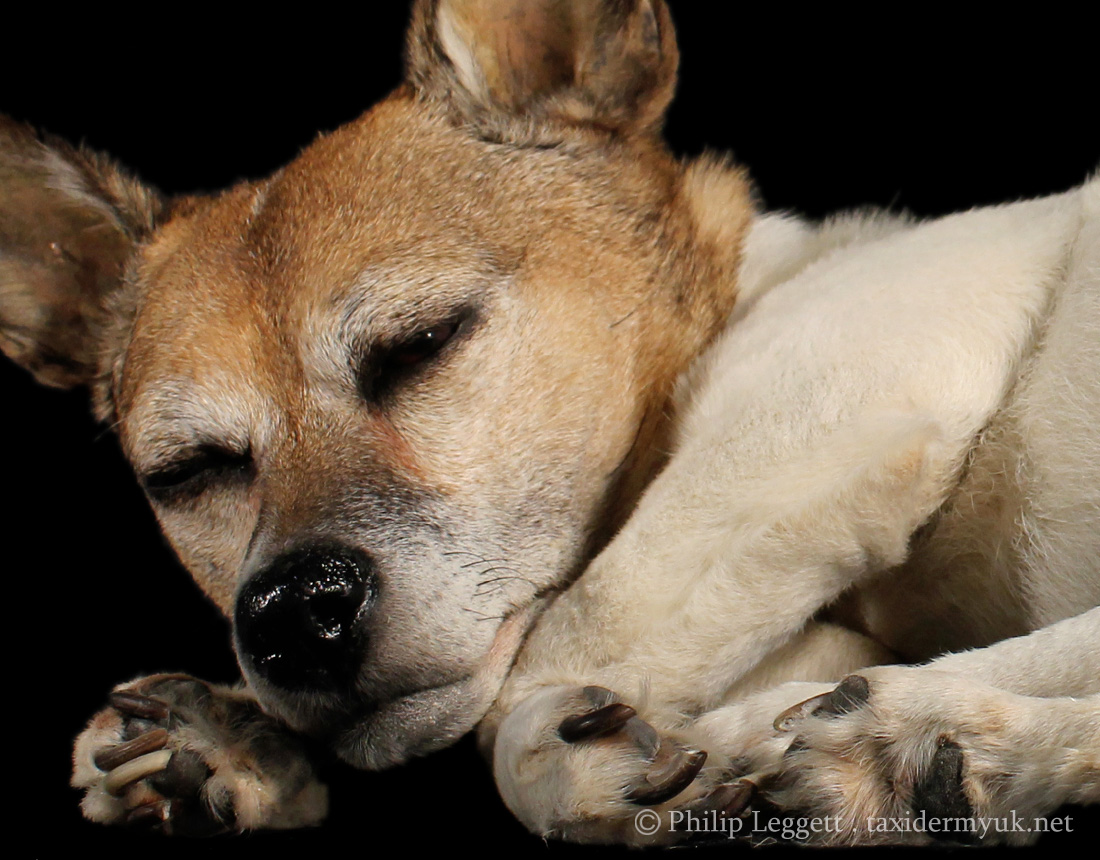 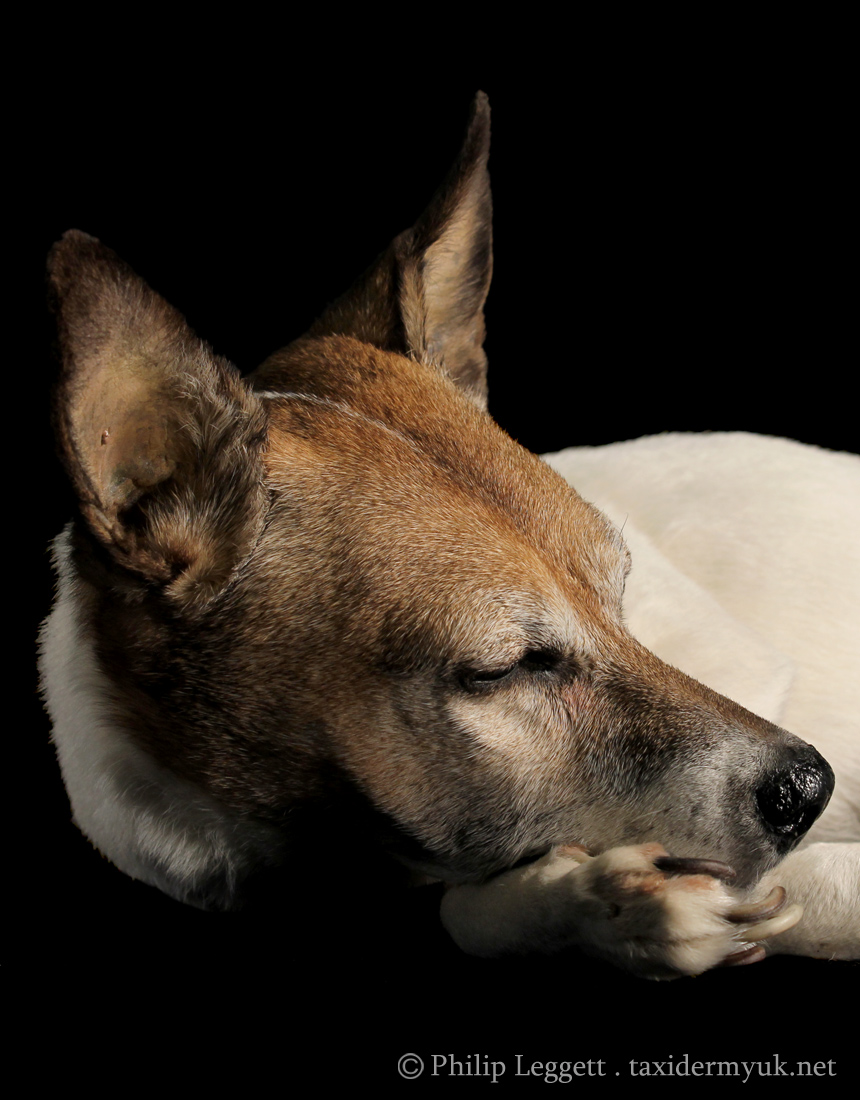 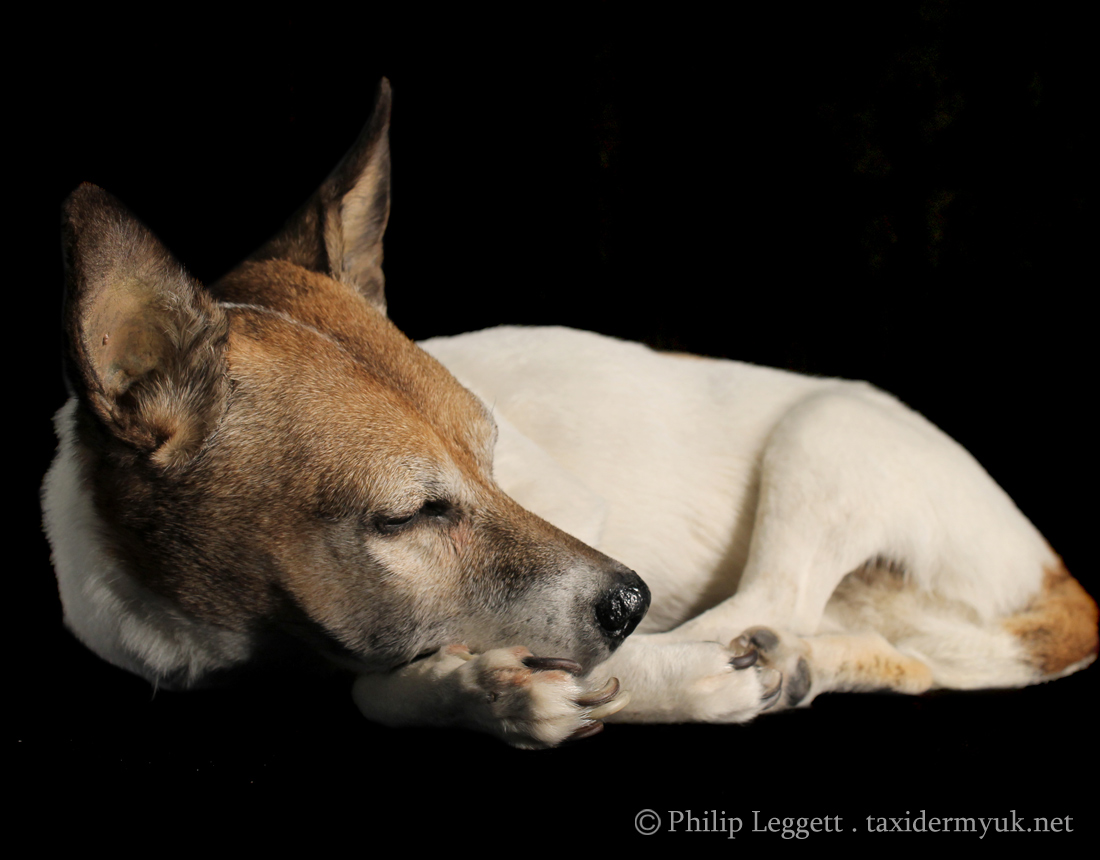 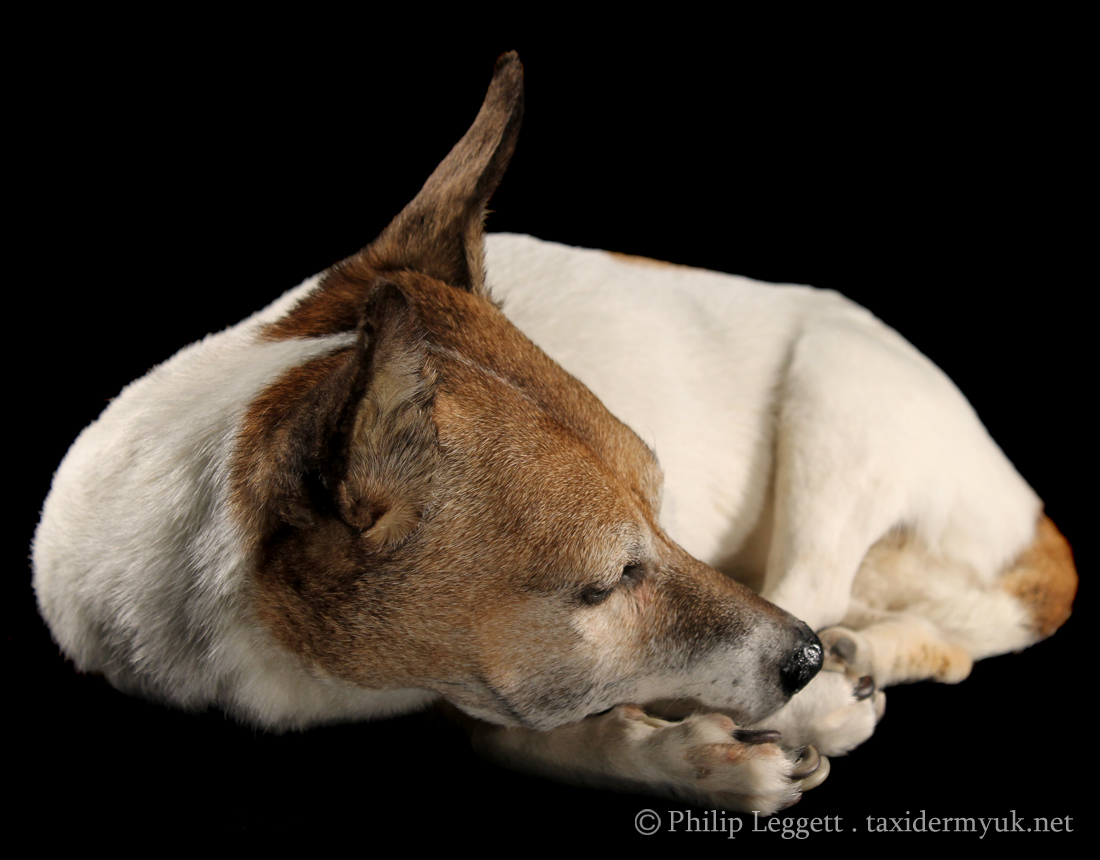 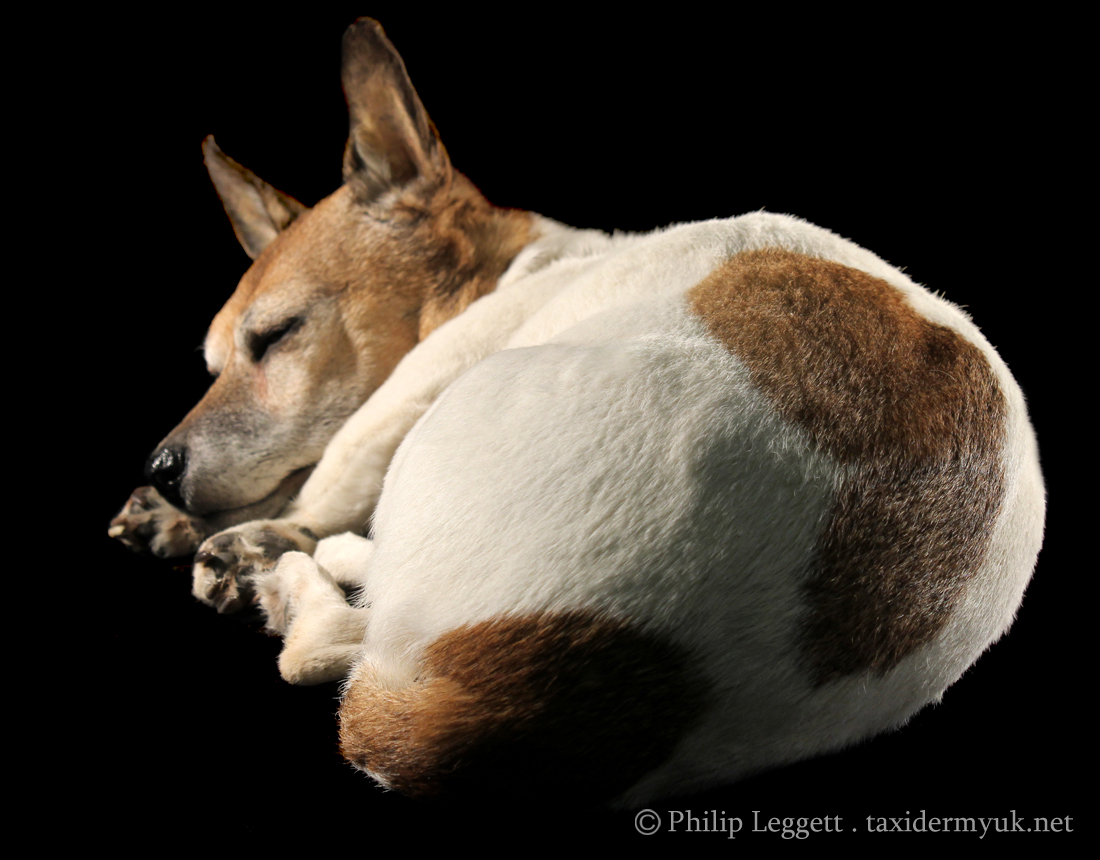 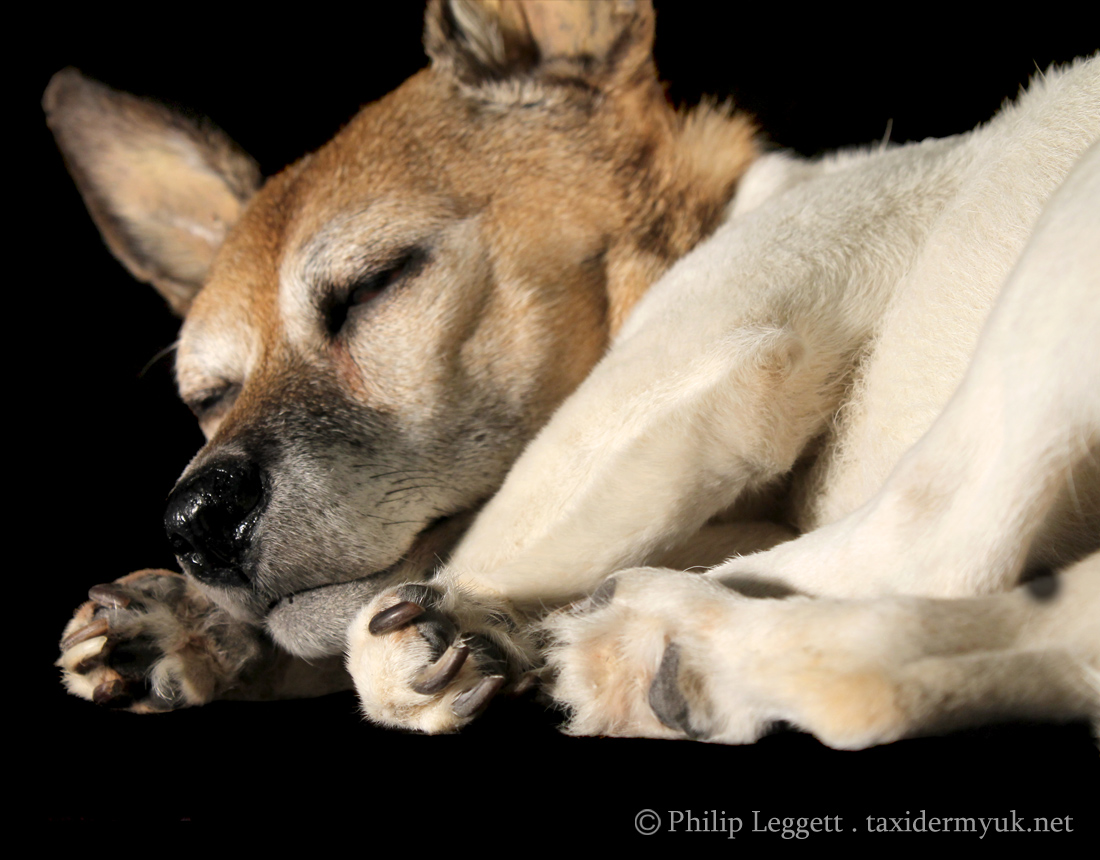 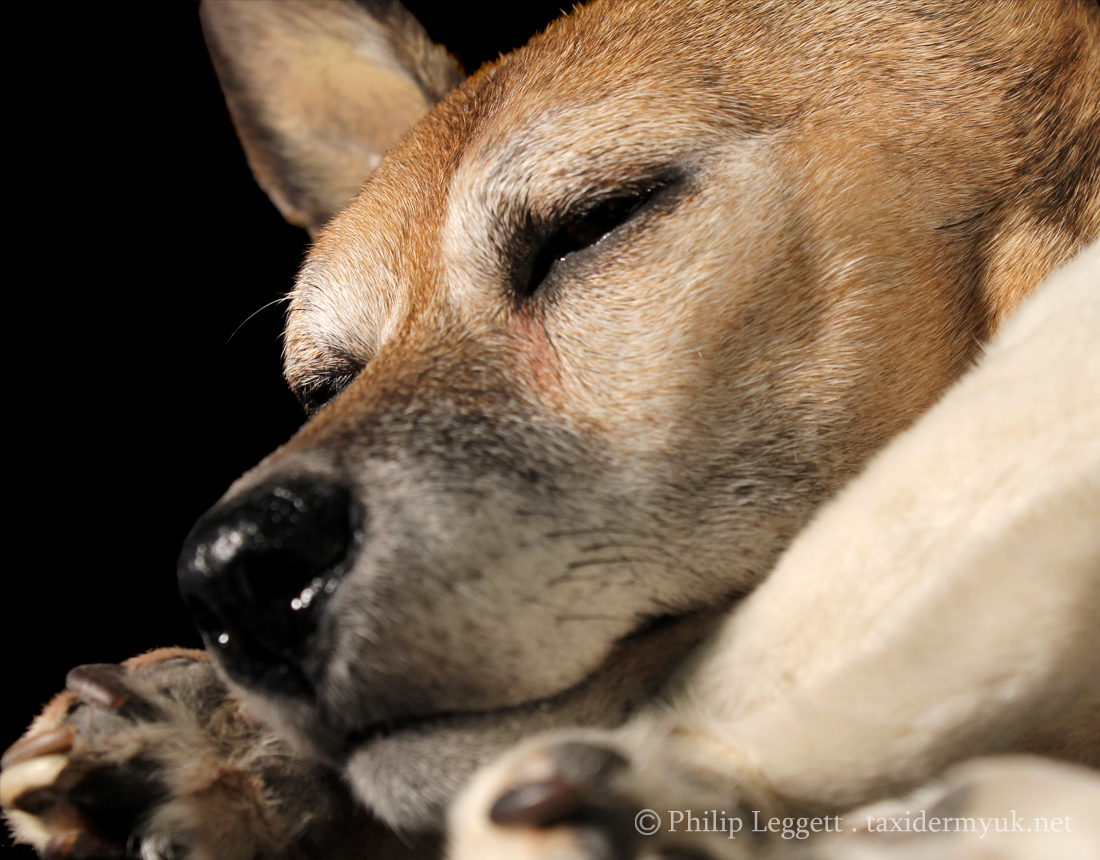 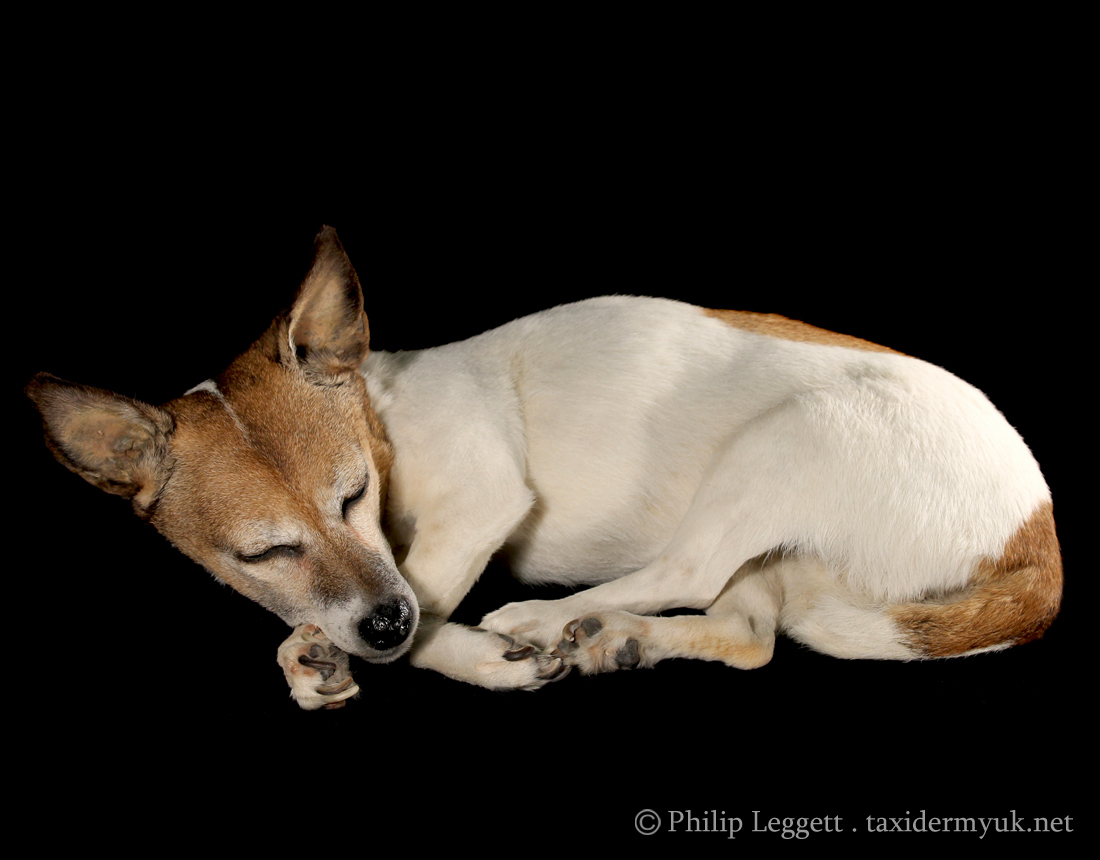 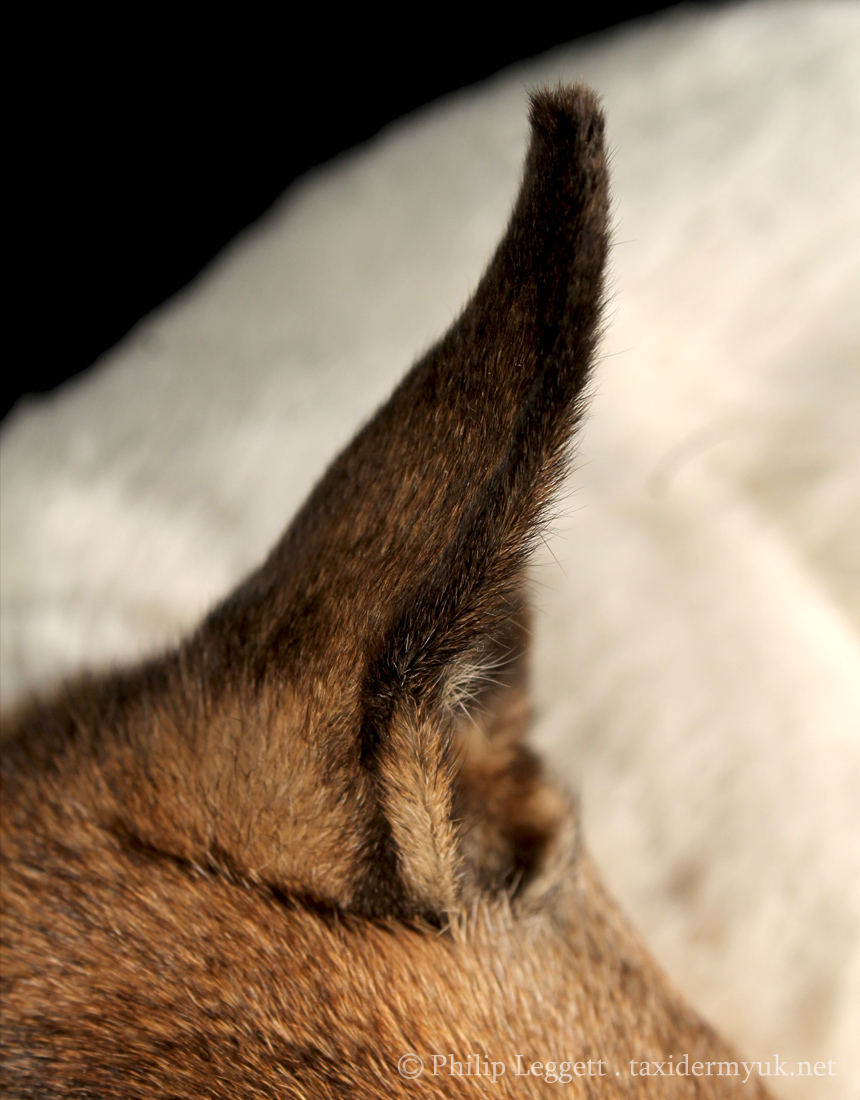 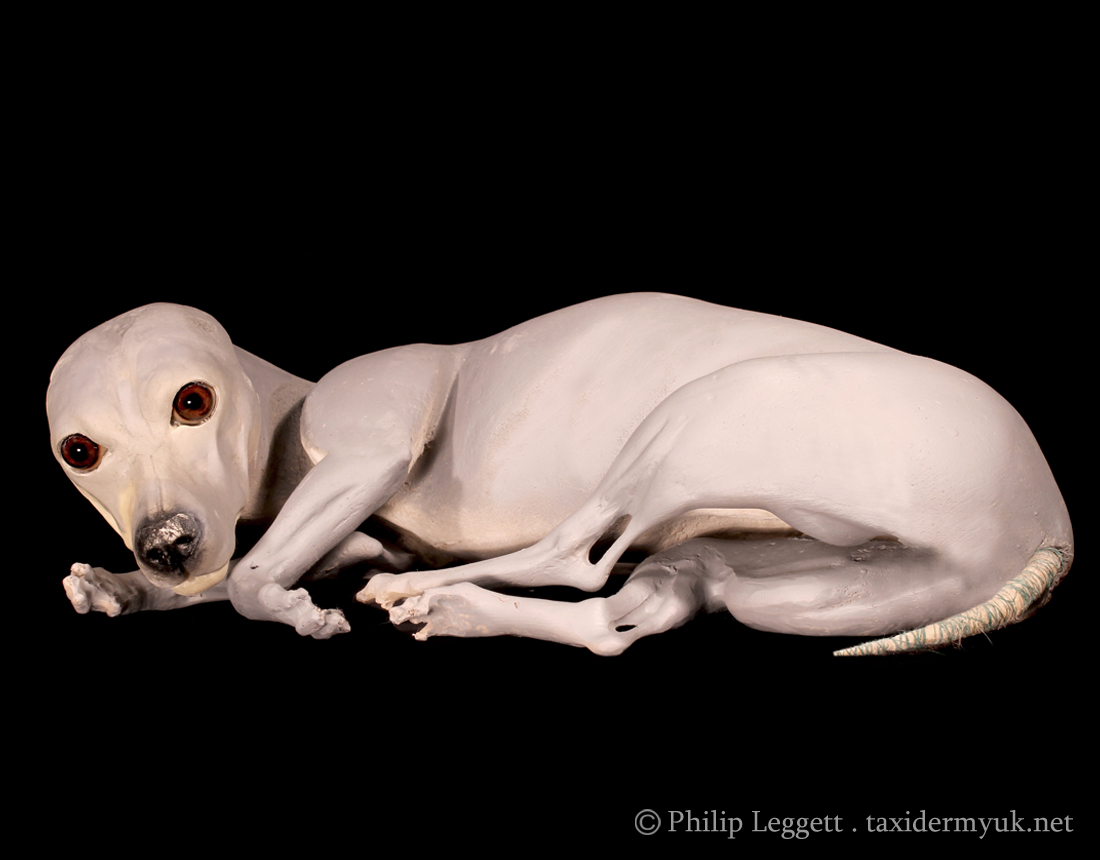 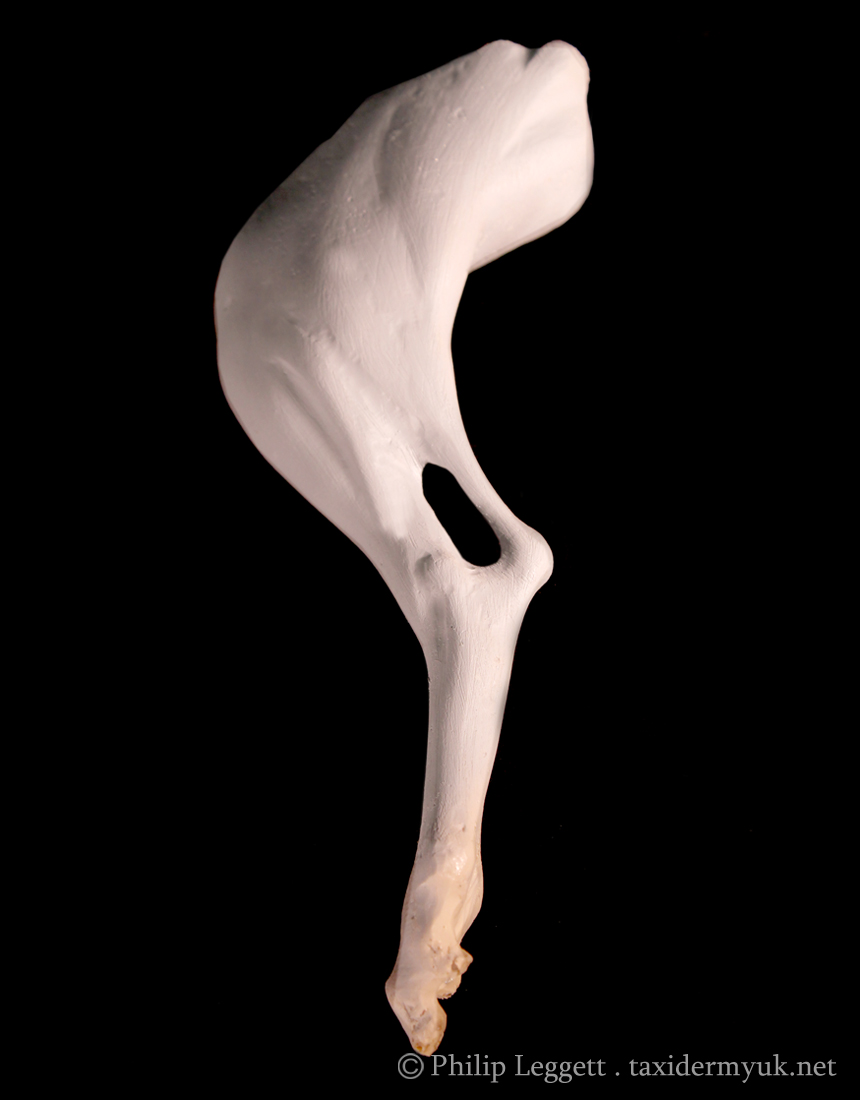 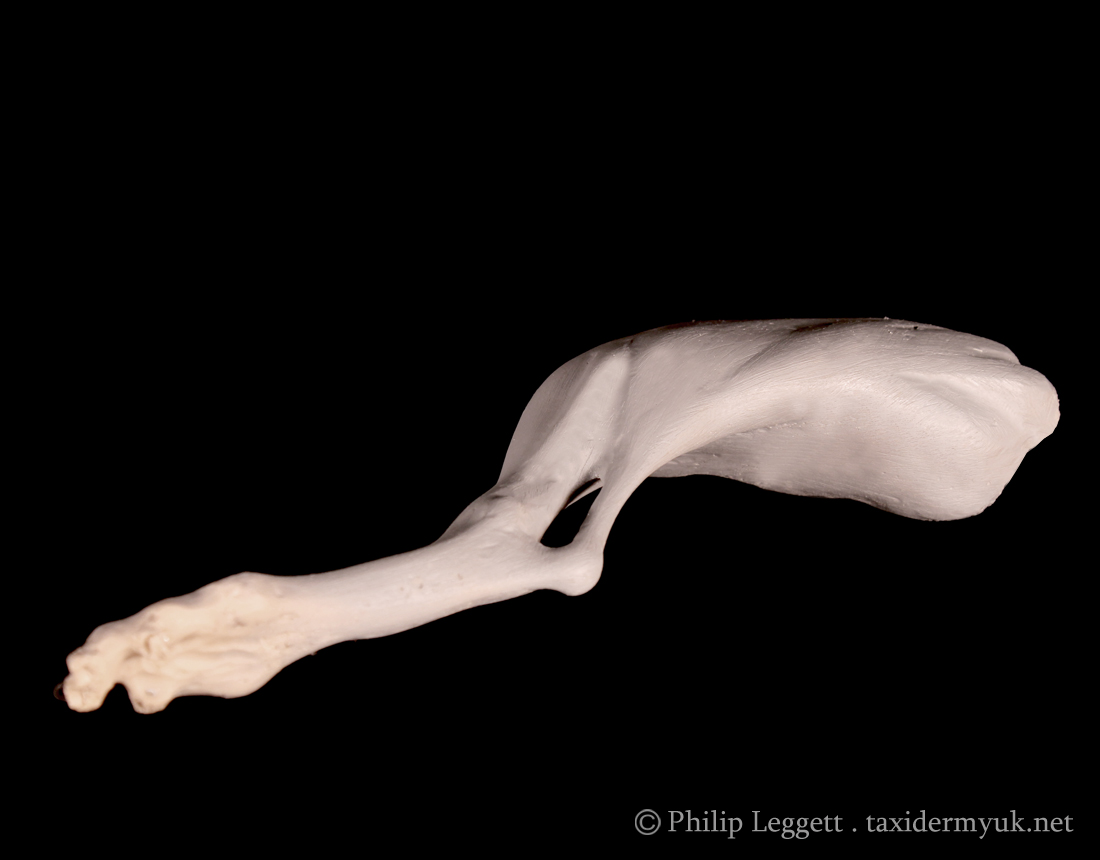 Bunty is a Jack Russell terrier, who passed away aged 17 years.  Unusually, her owners had been considering taxidermy as an option for some years, prior to her passing. As a consequence of this forethought, they were able to be focussed and considered about bringing her to us for taxidermy. However, even though both of her owners were adamant and completely comfortable that this was the option they wanted, we still agreed that a period of two months would allow them to reflect on it, in the weeks following Buntys passing, to be absolutely sure before coming to see us or committing to anything.

* Most potential clients, who contact us, only consider taxidermy in the hours immediately following the death of their pet and this is certainly the wrong time to be thinking about taxidermy of a much loved pet.  If you have found this page and are considering taxidermy, we would ask you to please read our policy on pets, link here PETS POLICY.
It will explain fully and clearly our position on this subject. Reading it fully is a condition of discussing pet taxidermy.

Once the decision was made to go ahead, we arranged a consultation and her owners came to the studio with her, to discuss in more depth what they wished to do. I was also able to examine Bunty to decide whether I would be able to do the work on her and get a good result. I explained the process, as I do with all clients, as I believe that an understanding of what the process actually involves means that expectations are not unrealistic, whilst at the same time educating and explaining to clients that high quality taxidermy is neither quick, nor simple and is in fact a technical and skilled process.

To gain some insight into how Bunty was in her life I requested any recent photos of her and asked about how she would behave when happy and relaxed at home. This may sound odd but it is very important, as the pose chosen must be one which is immediately recognisable by her owners as being characteristically typical of Bunty, in particular, rather than just any Jack Russell. After some discussion it became clear that Buntys’ owners knew how they wanted her to look when mounted. The pose they had decided upon (see photos) was of her almost curled up, dozing on her favourite chair with her head resting on her paw and her ears up. The finest detail is important when positioning pets, down to the individual positions of her paws and whether she would lie on her left or right side. Dogs, like people, have a left or right bias in their behaviour.

For pets in particular, I feel that it is very important that the animal looks contented and relaxed, rather than animated. Dogs and cats spend many hours dozing and lounging around the house and it is this that often makes us, as their owners, feel relaxed when they are around. Another consideration is that many pets pass late in life, or as a result of illness or infirmity. Animated (action) poses will often look awkward or inappropriate, as they capture only a moment in time from a long life.

In the images on this page, we have tried to show the very exacting levels of detail and accuracy we strive to achieve with our pet taxidermy work and, as with the images of Mittens the cat, we have also shown the model we created in order to complete Bunty. This may seem unusual, but I feel that people contemplating taxidermy of a pet should be given at least some idea of what we must do “underneath”. Effectively, we created a bespoke, unique model of Bunty to the highest anatomical accuracy, even down to individual bones and muscles.  This is exemplified in the cut away photos of just one part of the model for Buntys left hind leg which demonstrates well the high level of detailed anatomy we go to when working on pets.