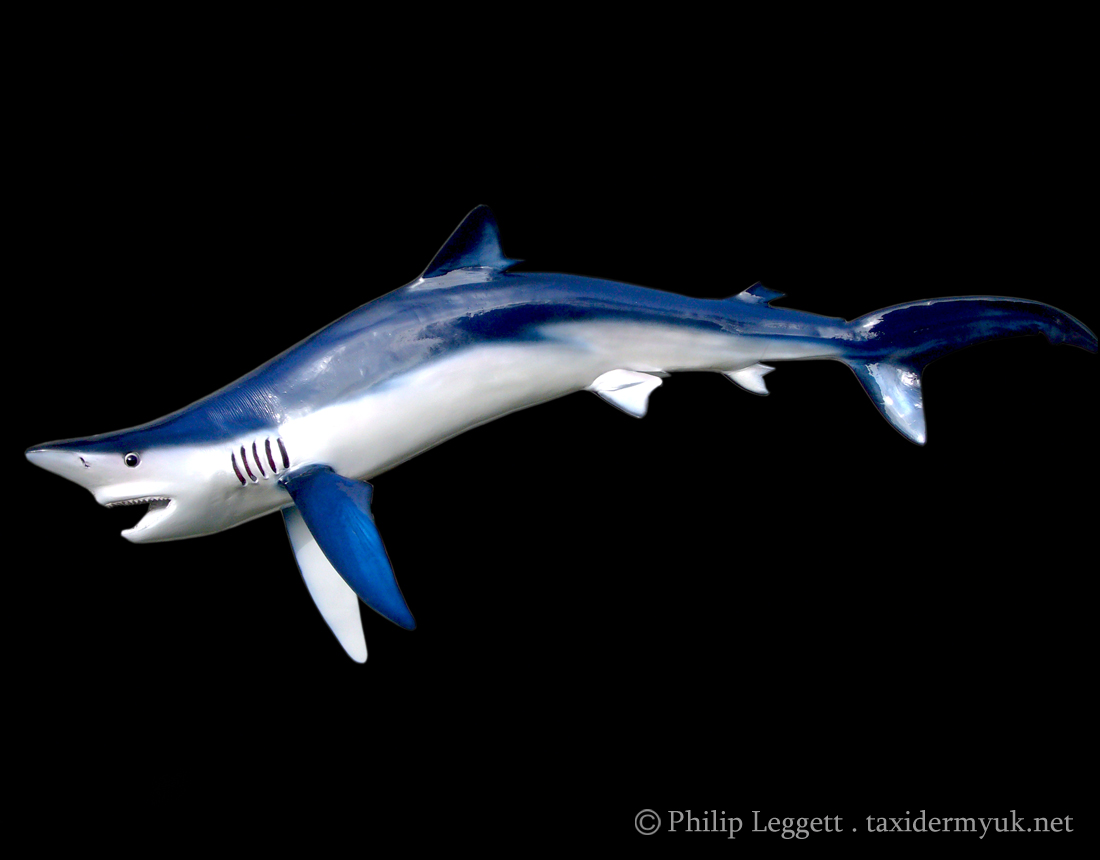 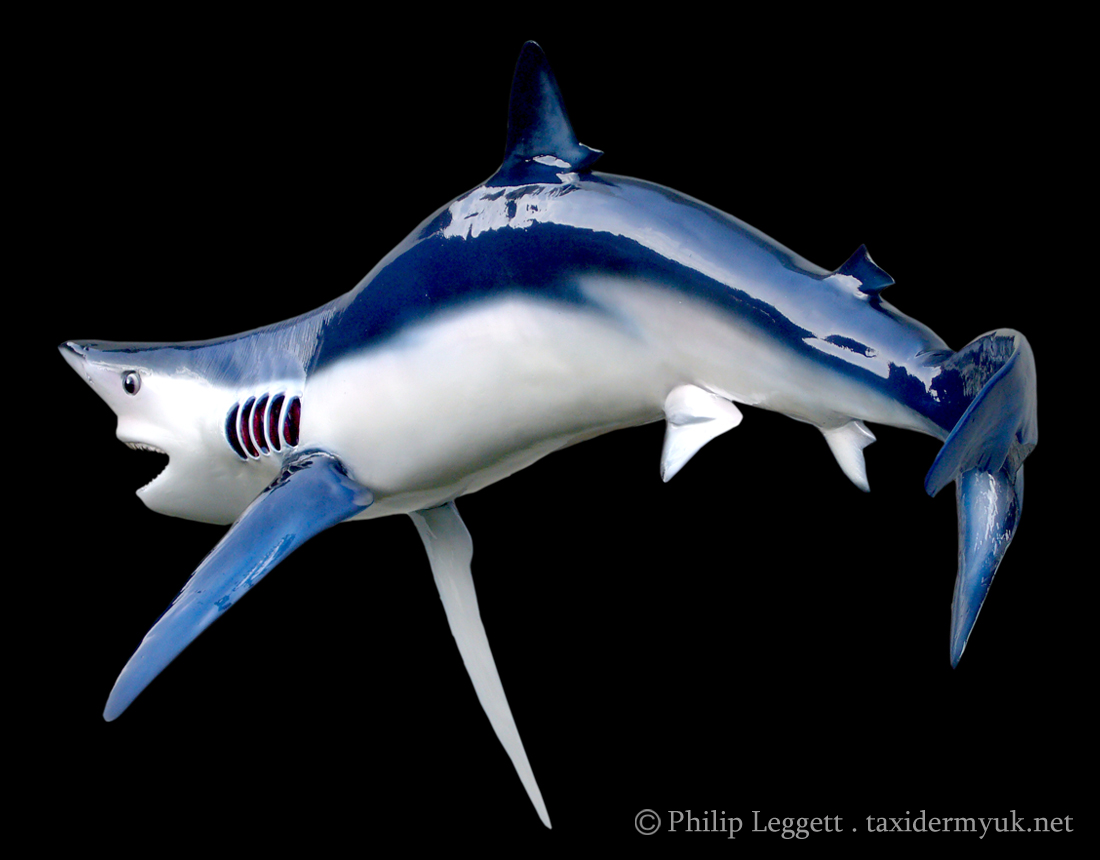 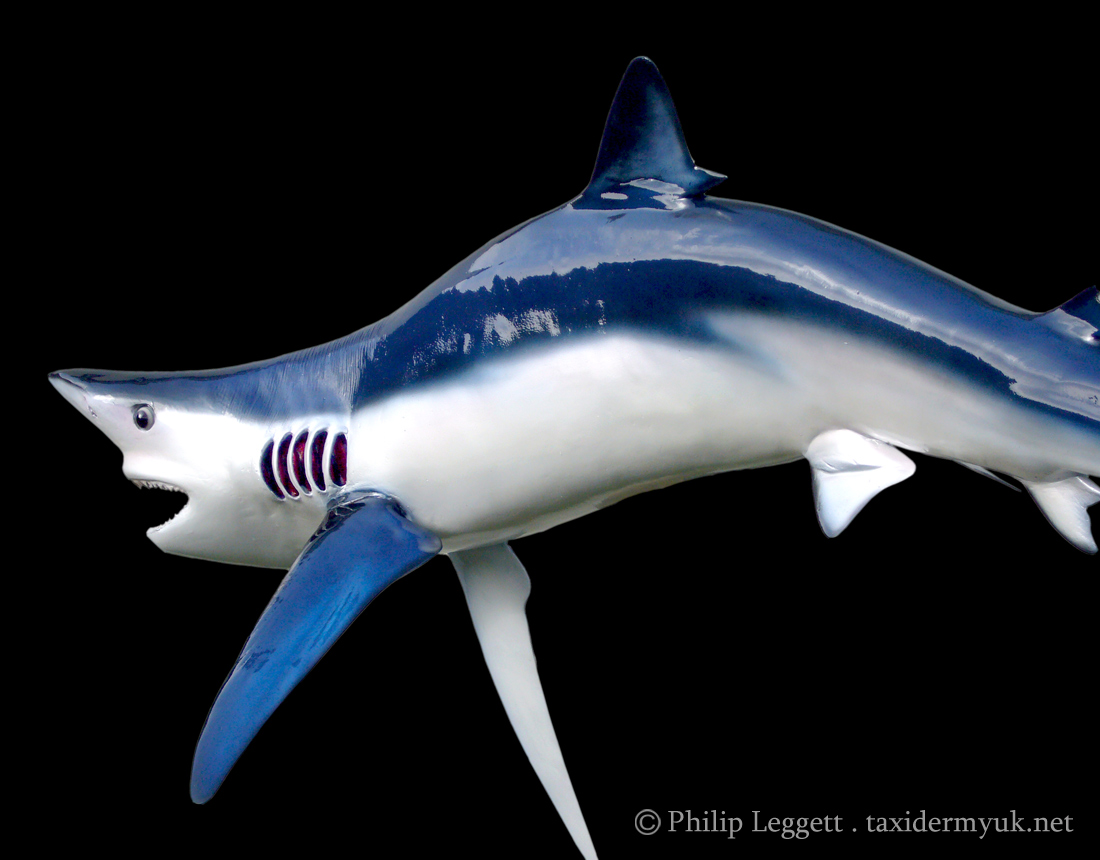 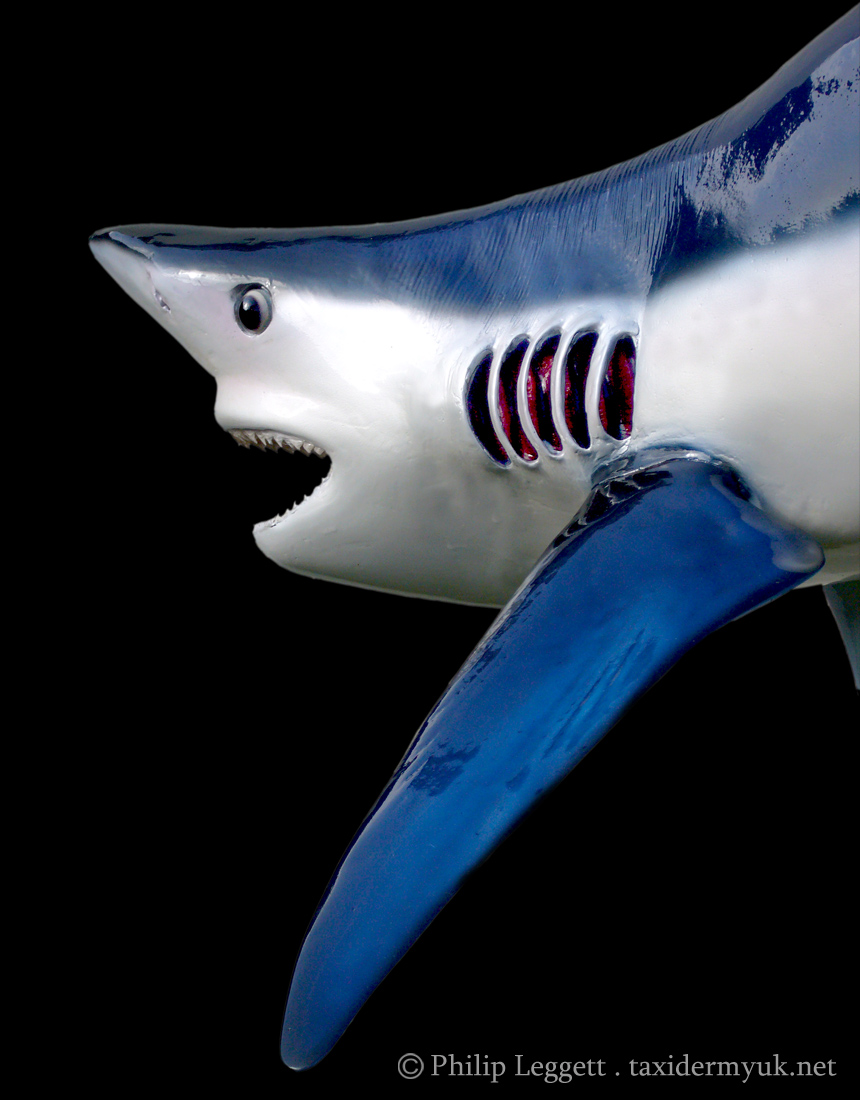 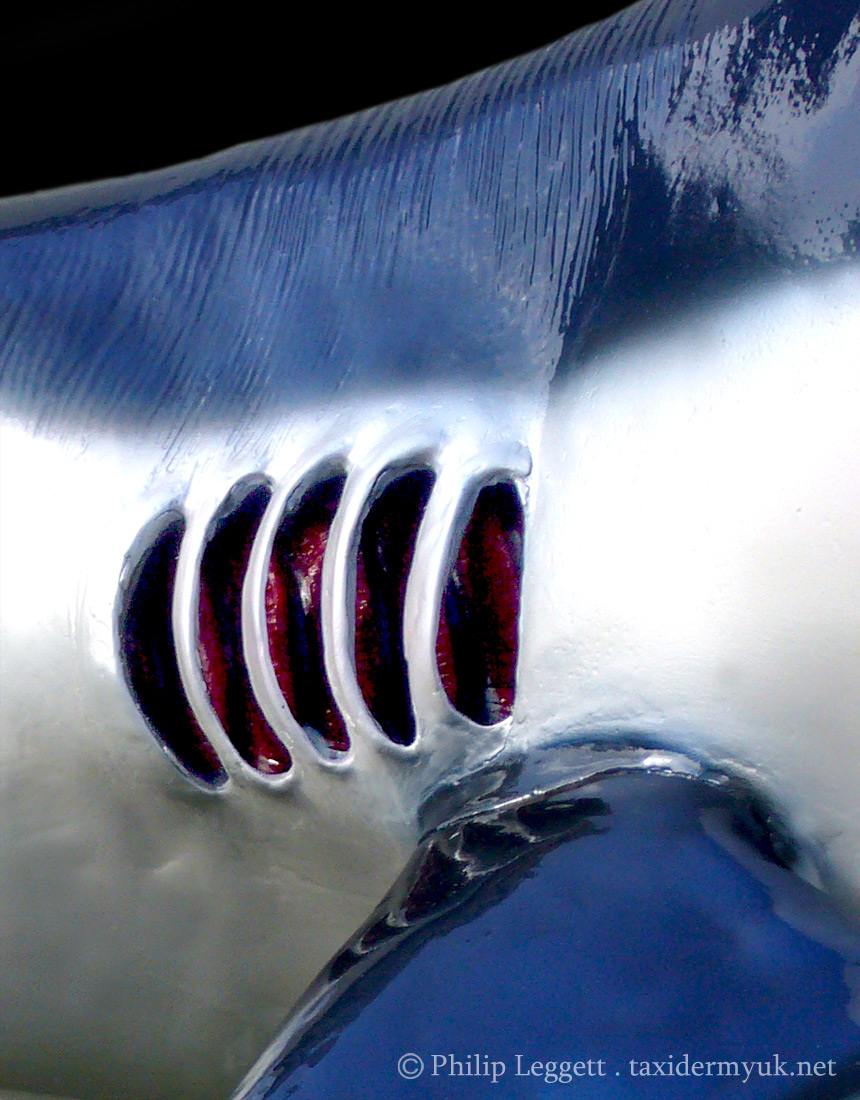 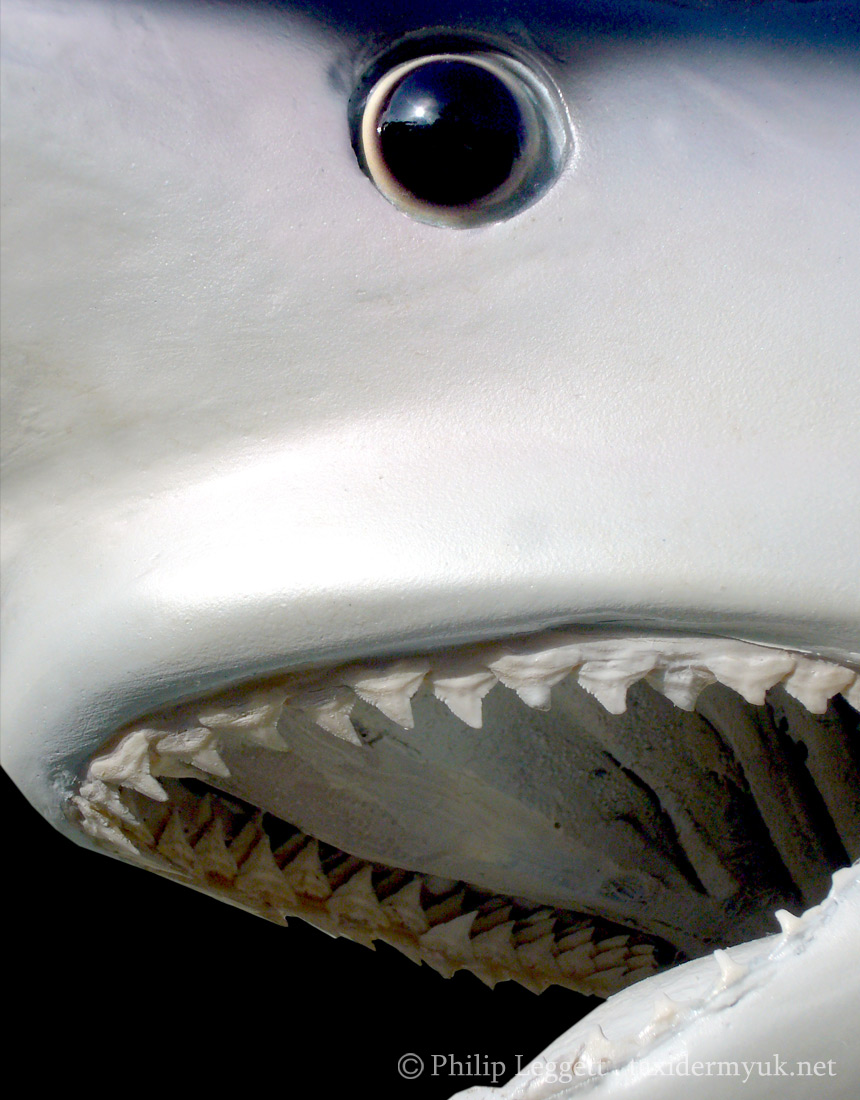 The Blue shark occurs in most oceans across the globe and they are relatively common inshore and offshore UK coastal waters. We have a good fishery for the species in the UK and shark fishing is a popular sea angling sport.  Today, although the odd one may be landed, most sharks are released back into the sea after capture to preserve stocks which are under huge pressure from shark fining, by-catch and general overfishing. Blue sharks can achieve 12 feet and over 400lbs, but this is not the norm in UK waters, where the record is around the 220 lbs mark. Many larger sharks are returned without being either boated or weighed to avoid injuries, so it can be difficult to give exact weights for specimen examples caught these days.

Blue sharks are migratory open water sharks and feed on just about anything from shoals of baitfish to injured sea mammals and dead whales. Not widely regarded as a dangerous shark to beach swimmers, they are however to be considered potentially dangerous to divers, open ocean swimmers and anyone injured in the water as they detect unusual activity from many kilometres away and will move fast to investigate it.

More reading on sharks at the following link…http://www.sharktrust.org/

This particular example was actually caught off the south coast, over 15 years ago. It was around 6 feet long (1.80 metres), weight unknown. We received the fish blast frozen and creating a mount from it as a complete fish, turned out to be quite a challenge. Sharks are rare in any taxidermy studio, this side of the Atlantic, and there is no specific method to turn to on working on one.

I did not have any knowledge of Blue sharks as an organism and needed to understand more about them, so I undertook some research to learn more about the species. I find every mount we do interesting and if I receive a specimen about which I have little knowledge, I make it my business to educate myself thoroughly on it as I believe firmly that good taxidermy is only possible on any animal if it is studied and understood in its live state. Sharks are fascinating creatures and the opportunity to work on this one and learn so much was a privilege. Skin mounting a shark is completely impractical as the skin does not lend itself to the taxidermy process and give a good result, so I had to consider how to achieve an accurate, quality mount of the specimen. The only option then would be a cast of the shark.

The final position for the mount also needed consideration. I was lucky that the client gave us a relatively free hand with it, so I wanted to achieve something a little more interesting and behaviourally specific than the predictable “stick straight fish” normally presented.  My research on sharks, particularly reading accounts of them, often written by divers with close up encounters, flagged up something which interested me. These accounts showed and spoke of an aggressive or defensive demeanour, which sharks often take up when feeling threatened. They will lower the pectoral fins and arch their back, swimming with slower more deliberate movements. This pose is both interesting to see and makes for a more dynamic mount.

Once I had decided on the pose, I had to consider how to prepare the shark for moulding and casting, because having been frozen, it was flaccid and having no bony skeleton, was flabby and floppy and was more like a bag of wet sand than a shark. Impossible to mould in its thawed state, I had to work out how to transform the flaccid, stinking carcass into an aggressive looking, free swimming shark and then produce an accurate mould of it from which to cast the fibreglass replica. Preparing the shark in the pose required took some time to achieve, but the moulding was ultimately successful and allowed me to produce a complete fibreglass replica of the shark in the desired position. To be as accurate as possible, I wanted the mouth and the gill covers to be open, as in the water the open mouth would push them open and expose the gills inside. The mouth and gills were made separately. Also the original jaw set was cleaned and all installed, prior to finishing and painting the mount.

I engineered a light steel frame inside the cast which allowed for it to be hung on the wall, with a custom made steel bracket which fixed to the wall.